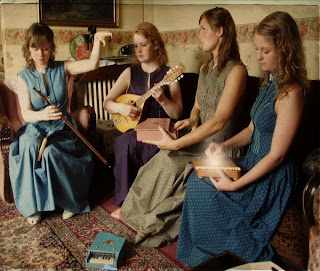 After missing them in Kilkenny last year absolutely jumped at a second chance to catch Amiina at the Dun Laoghaire Festival of World Cultures.

Fantastic planning, organisation and preparation coupled with a lengthy appearance from the oh so unpredictable Mr. Sun meant the vibe floating around the coastal town was a perfect build-up before taking my seat in the Pavilion Theatre located in the heart of the town centre.

Most famous for being Sigur Ros' string section on albums such as Takk, violin, viola and cello played mostly second fiddle (get it?) to the saw, bells, harpsichord, piano, a mac and a live drumkit with the latter adding that extra bit of bite to what I feared might be a very nice performance, too nice.

My fears were dispelled within seconds and the show, from start to finish, was both engaging and beautiful at every twist and turn featuring an appearance from Irish fiddle-player Caoimhín Ó Raghallaigh and a visual show from Dónal Dineen. With a new album on the way in September and judging by how many albums were sold after the performance (by the band themselves I might add) Amiina will be back sooner rather than later.