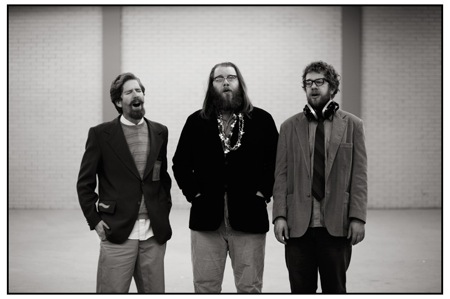 A good week for Cyprus Avenue with a great show from The Besnard Lakes on Monday night (Read the review here) and even better value-for-money last night.

Nashville's Caitlin Rose was first to the stage kicking off with "Learning To Ride" from debut album Own Side Now, released in Ireland earlier this month. Bopping along to Soft Cell, which was playing over the P.A. system as she took to the stage, Rose exuded exquisite control, technique and poise from the very first strum of her Gibson acoustic.

Usually a five-piece but a trio last night, (a major chunk of the U.K. tour will actually be solo) Jordan Caress (bass) and Jeremy Fetzer (electric guitar) could never be described as "a solo artists backing band" with Caress providing pitch-perfect, well-executed harmonies on top of her bass lines as Fetzer filled up the sound with gorgeous country lead-lines like only an expertly played Fender can do.

The duration of the set was nicely timed, even allowing for an encore of "For The Rabbits", with "Shanghai Cigarettes", "Own Side" and "Sinful Wishing Well" personal highlights. Saying that no track stood out as particularly weak or "in-progress" with the setlist as a whole impressively strong. Caitlin now jets off to Manchester to begin her U.K. tour. I have a feeling she will be back.

Not strangers to Cork, (the band played their first ever Irish show last December in the Cork Opera House as part of the Murphys Big Night Out), Megafaun appeared far more at home on a smaller stage in amongst their own fans than on in a sprawling Opera House setting. Boundless energy from the get-go you could not help but get the feeling that the trio enjoy every second of their tours. It wasn't long before Brad Cook, guitarist and lead singer (mostly), literally said this inbetween both thanking and telling the crowd how much he loved us.

Treated to tracks from the soon-to-be-released Heretofore as well as numbers from 2009s Gather, Form and Fly such as the brilliant "The Fade" the band showed that they have mastered creating a party, feel-good atmosphere but are not afraid to show a more fragile side of Megafaun displayed best in the mostly instrumental closing number "Bonnie's Song".

I say closing number but it was barely a minute before Phil, Brad and Joe were back on stage and by back on stage I actually mean directly in the middle of the crowd breaking into an acoustic, bordering on a-capella rendition of "Worried Mind"
. Both the infectious enthusiasm of the band and the melody of the song spilled over into the crowd which promptly took over vocal duties from Westerlund and the brothers Cook who had been joined at this stage by Caitlin Rose and crew. Covers from The Band and a crowd driven version of "Tell Me Why" from Neil Young (Brad admitted to me that he had to struggle to hold back the tears at this stage) ended the show on the highest of highs.

Not ones to head off into the sunset and enjoy their successful Cork show, the boys from North Carolina stuck around to fulfill a promise to attempt to hug and speak to everyone in the place. I think he may just about have fulfilled that promise.