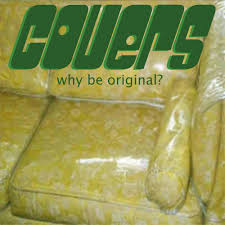 Such Great Heights
Originally by The Postal Service
Having made his name as frontman and songwriter for American Band Death Cab For Cutie Ben Gibbard took some time off from his rockband duties and went to work on a side project with producer friend Jimmy Tamborello. When I say "went to work" it was more like record a little ditty here and email said ditty to Jimmy. He in turn would work on that blossoming ditty, add his own petals and forward the ever expanding ditty back to Ben. The result of this "dittying" was Give Up, the debut and only album from the act known as The Postal Service. The side project went on to become Sub Pop's biggest selling album since Nirvana's Bleach.

One of the stand-out tracks on Give Up is the second track, "Such Great Heights". Like most of the other tracks on the album the song has an electronic beat with a pop melody that chugs along quite contentedly.

I am thinking it's a sign that the freckles
In our eyes are mirror images and when
We kiss they're perfectly aligned
And I have to speculate that God himself
Did make us into corresponding shapes like
Puzzle pieces from the clay
True, it may seem like a stretch, but
Its thoughts like this that catch my troubled
Head when you're away when I am missing you to death
When you are out there on the road for
Several weeks of shows and when you scan
The radio, I hope this song will guide you home

I tried my best to leave this all on your
Machine but the persistent beat it sounded
Thin upon listening
That frankly will not fly. you will hear
The shrillest highs and lowest lows with
The windows down when this is guiding you home

The song obviously stood out for Sam Beam, a.k.a. Iron And Wine, too. Casting off all the noodly electronic bits and beats but keeping the infectious melody and simply slowing it down, Beam recorded a stripped-down version for 2004 indie-breakthrough movie, Garden State.

http://www.postalservicemusic.net
Cover Up The Facts Iron and Wine