Weekend of Music at Christ Church 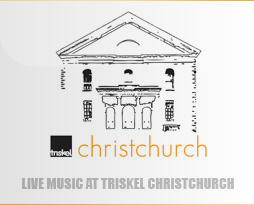 As you may know I have been both pretty excited and impressed by the opening of the new Triskel Arts Centre Hub and Christ Church partnership.Plugd and Gulpd are up and running as well as The Black Mariah upstairs. This weekend it was finally time for the live music calendar to go live.


It had been announced earlier in the week that the night was a sell-out so some degree of success had been attained before anything had even kicked off. We arrived Friday about ten minutes before Lisa Hannigan and band took to the stage/altar at about 9pm (on Saturday night Ger Wolfe began at about 8.15pm so this is a heads-up for those fashionably late folks who may need to get their brylcreem sorted out a little earlier than usual).

Entrance is through the Triskel (the side entrance rather than the front gates of the church) and the first thing that stood out was the large queue for beverages tailing out of Gulpd. As the place was at full capacity we headed upstairs to stand at the far back which would have been fine but an extremely nice member of the Triskel staff insisted on getting the two of us chairs so we could squeeze in at the corner (nice one Frankie!) and enjoy the show.

The place looks incredible as a live venue with the lights turned down low and the natural atmosphere created by a church demanding a certain respect from a Saturday night crowd that you would not get from a more modern venue i.e. people were nice and quiet during the performance

Lisa Hannigan charms most crowds with her sweet ways and Friday May 6h was no different. As you would expect songs from her only solo album to date 2008's Sea Sew, such as the extremely catchy "I Don't Know", and "Lille" (from the 2009 E.P. of the same title) went down well with the crowd but what most impressed me were the new songs (that will appear on her second solo album expected later this year) that show how much more confident the girl from Meath has grown as both a songwriter and a frontperson. A new track sent the crowd away laughing despite a seemingly morbid (and catchy) chorus with Hannigan pleading "Don't Die"! First show down and most (but all should) agree that it was a great success.

Surprisingly Ger Wolfe didn't do quite as well as regards ticket sales for his appearance but the heavy rain and winds probably did not help improve the situation but it did mean that we were assured of a seat downstairs in one of the pews which I may add are extremely comfortable. As stated above the show kicked off at 8.15pm so unfortunately we missed the first half but the second half was so good it did not detract from my enjoyment of the Corkmans performance.

Tracks from Heaven Paints Her Holy Mantle Blue (which included "Princess Please" and the title track from the album) were my personal highlight interspersed with some reels (with Ger joining Edel Sullivan on fiddle) and even a waltz from accordion-player Richard Lucey all backed up perfectly by the bass of Paul Frost. An encore of "The Curra Road" barely made up for the crowds disappointment at the announcement that the band were finishing up as I swear everyone could have sat there all night..

Fréamh: Root, the latest album from Ger Wolfe is out now and available to purchase.

This Sunday will see Hauschka provide a soundtrack for Carl Dreyer's 1932 masterpiece, Vampyr. Vampire movie in a church? How could anyone not want to go! This Irish-exclusive performance is priced at €17/€15 and tickets are available online and at the Triskel box office in the Triskel Arts Centre itself.