We have had blasts from the past in recent weeks as Bjork and Stone Temple Pilots' MTV Unplugged sessions have been unearthed in the very aptly titled post, MTV Unplugged Unearthed. This week it is the turn of Live. 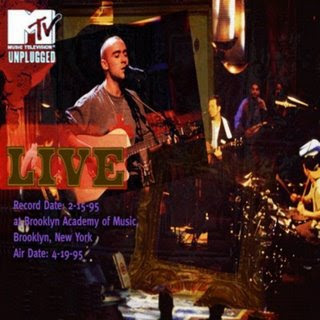 Recorded in February 1995 and aired in April of the same year Live were the next big thing with breakthrough record Throwing Copper receiving serious airplay in the States. The foursome (from York Pennsylvania) only had one previous album (Mental Jewelry, released in 1991) which had gone relatively unnoticed. Lead singer Ed Kowalczyk references this fact before the band kick into "The Beauty Of Gray" (the only number from Mental Jewelry to appear on the show).

One of the highlights of the performance is a cover version of a Vic Chesnutt song ("Supernatural") that Kowalczyk describes as "absolutely the most beautiful song ever written by a human being". College radio hit "Lightning Crashes", as expected, draws the biggest cheer of the night from the live studio audience.

I am not sure what genre you would class Live as these days but back in the day they were indie/alternative rock with the band never again reaching the peak they did with Throwing Copper and in some ways their path mirrored fellow-countrymen Counting Crows fall from critically acclaimed artists to over emotional U.S. love-rockers who lost their way. The MTV Unplugged performance from 1995 is a snapshot of a young band that have just scaled the mountain. Let's not focus too much on their short stay on that same summit.