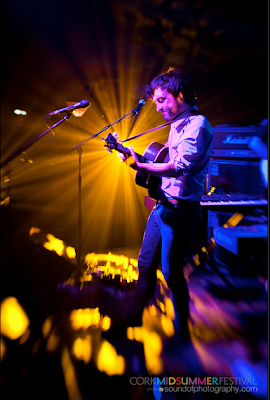 Richie Egan's Jape lit up the Murphy's Spiegeltent last night with a combination of a blend of electronic rock pop and his tireless energy and enthusiasm.

On the night Jape consisted of just Richie and a bass player as he apologised that their regular drummer was off on tour with Lisa Hannigan but, after a slow acoustic number began the night on a little bit of a false start (the chatter was a bit menagerie-esque and the crowd was noticeably absent from the dancefloor area), the electronic drums may have worked to a positive as people were soon crowding up the front and dancing their socks off to the various electro-beats.

Egan, who just a few weeks ago made an appearance at Cork X Southwest in Liss Ard, on a number of occasions expressed his delight at the reception he received from the Cork crowd and was especially impressed by the number of folks that danced continuously throughout the set.


"Thanks to seriously lovely people of Cork - again! - for listening to us - two nice gigs! We miss Ross and Matty a bit though - beer now :)"

Unsurprisingly a highlight on the night was "I Was A Man" as well as "Christopher And Anthony" and "Replays" which all feature on the 2008 album Ritual. Oddly enough one of the weaker songs on the night was "Floating", the Redneck Manifesto bass players biggest single to date, which may have particularly missed a live drummer but this was more a testament to how well the newer tracks (from the coming album Ocean Of Frequency) such as "Hands Of Fire" and "Lying On A Deathbed", which are currently available to stream for free here, are sounding on early listens.

Jape are the first band that I have caught at this years Spiegeltent and, although it looks a bit terrible from the outside-looking-in, the location works very well as attendees feel like they are at a mini-festival cut off from the rest of the city free to relax in another little world created by the Cork Midsummer Festival team. Other  acts I plan/hope to catch in the famous tent include Breathe Owl Breathe, Mick Flannery & Katie Kim, Cap Pas Cap and L’Orchestre d’Hommes performs Tom Waits.


To check out the schedule for the various shows and performances you can visit the official Cork Midsummer Festival website by clicking here.