And it's goodbye from KVX 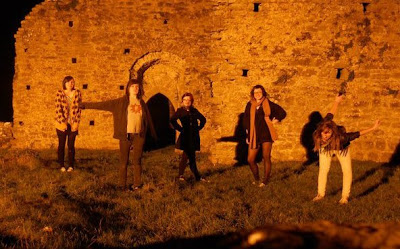 “All good things must come to an end”. The saying may be hundreds of years old but it will be of no comfort to fans of KVX who play their last ever live gig together in The Pavilion on Saturday, August 6th. After “millions of chats, oceans of tea and mountains of biscuits”, the girls have decided it is best to go their separate ways after six years as a quintet.

The good news is that KVX will go out with a bang. Talented friends such as Hope Is Noise, Agitate The Gravel and more will join Eimear, Leah, Daire, Ciara and Niamh onstage at The Pavilion on Saturday on a night that is sure to have nothing less than a party atmosphere yet it is inevitable that the night will be full of mixed emotions :

“I think we'll have all of the feelings.” admits Daire, the bands violin player, who took some time out from recording their final tracks during the week to speak about the upcoming gig. “Happy to be playing what will hopefully be a really fun gig, sad that it will be the last time we'll play our songs together, mortified during the slideshow of old footage we're inflicting on the audience and proud of how much we've learned over the years. We promise it will be an emotional affair. Personally, I know i'm going to cry all over everyone.”

After six years together as a tightly knit group and over a hundred live gigs including a performance in front of an estimated 90,000 television viewers for RTE’s Jam (battle of the bands competition aired in 2006) it is understandable the band have accumulated plenty of memories. I asked Daire and co. to reflect on some of the best : “We all love a good road trip. There have been some hilarious night time voyages getting lost on the way home from faraway gigs, while listening to Now 50. We have an odd habit of exploring castles in the middle of the night too, so we try and get lost near one wherever possible. Recording Dinner (the bands second E.P. which received critical acclaim from the likes of Hotpress) last year was one of the best trips I suppose, it was like a big extended sleepover. We're good at having fun.”

Both great and terrible bands have been breaking up for years usually due to one rock and roll cliché or another; in-band fighting, pressures of stardom and artistic differences to name but a few. None of the above is true for the fivesome who have made it quite clear that all is good in the KVX camp : “We all still love each other, but it’s just not the right time. It is our hope that, a few years down the line, we will all end up in the same place making new music together”. In KVX’s case the age old proverb may have to be updated to “All good things must come to an end...but you just never know”.

KXV play The Pavilion on Saturday, August 6th. Tickets are priced at just €3.

The Dinner E.P. is available to purchase in Plugd Records on Tobin Street.

*This post was published in the Downtown supplement of the Cork Evening Echo on Thursday, 4th August 2011