The Reich Effect : Efterklang in The Savoy (July 30th) 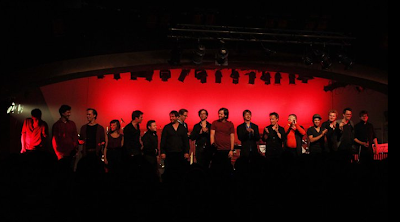 On Sunday evening The Reich Effect, a wonderful festival celebrating world-reknowned minimalist composer Steve Reich's 75 years on planet earth, came to a close with a performance from Dublin's Crash Ensemble in the Cork Opera House, the five day events spiritual home. Was it a success?
Well let's see; good attendances, high profile names, excellent performances, extremely positive atmosphere and all fantastically organised. John Kelly, who had the pleasure of interviewing Steve Reich in the Cork Opera House on Wednesday night following a screening of Phase To Face, had already tweeted on Thursday night to confirm the great man was delighted with all the performances he had seen on his two day visit including the Irish premiere of WTC on Thursday night by the magnificent Kronos Quartet.  In this bloggers opinion it was truly an unmitigated success and, speaking truthfully, I could have gone home on Thursday night, not attended another show for the rest of the week and still have this opinion. How could it of get any better? Step forward Efterklang.

I have had the privilege of catching these four boys from Copenhagen twice before and both times were excellent shows so I must admit I was well prepared for a really good gig in The Savoy on Saturday night. A friend and I were so confident it would be a good gig that we managed to convince two lovely Canadians (hello Gram and Kat!) to part with a larger-than-planned portion of their travelling budget to accompany us into The Savoy.

I admit I was a little nervous after I was threatened with "If these are not good..." violence but within just thirty seconds of the first song I was sure I was safe. In fact in that same time frame I had a pretty good feeling that I had just walked in on Cork's gig of the year. By the end of the night I was certain.

As discussed with Casper back in June (see interview here) the band were accompanied on stage by both Daniel Bjarnason and their Messing Orchestra (an incredible brass section who travelled all the way from Holland for this single performance) so it was quite a crowded stage from the very beginning.

The extra players on the night sure added a bit of "oomph" to the likes of "Alike", "Modern Drift" and "Harmonics" from the bands latest album Magic Chairs but it is a testament to their abilities as musicians, songwriters/composers that, for the few songs played without their guests on the night (such as "I Was Playing Drums") there was no dip in the setlist which was quite remarkable. Yet when you have musicians as talented as the multi-versatile Peter Broderick (one of my favourite solo artists of the past five years; check out Home, seriously), Heather Woods Broderick and Canon Blue (with the later two both providing support on the night) merely playing as part of your back-line with all three providing sumptuous backing vocals something special is always going to be on the cards.

What was quite clear on the night was that every single person on the stage was enjoying themselves immensely and the Savoy crowd were no different. The bands "victory" march, brass band in tow, which involved several hugs, kisses and whispered thank-yous summed up the feeling on the night just before they left the stage; sheer goodwill. There was no encore, merely a synchronised bow fitting of the classically-inspired festival that was in it. Like I said I could have skipped the weekends performances and still enjoyed The Reich Effect but I am sure glad that I did not.