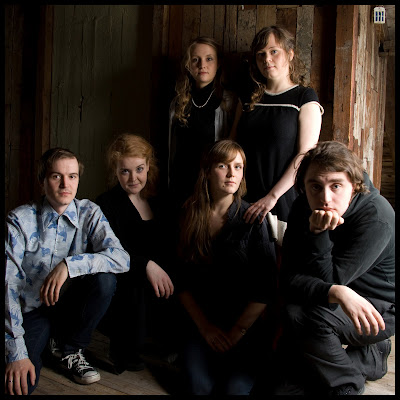 *An edited version of the below interview appeared in the Downtown supplement of Cork's Evening Echo on Thursday, October 13th.

Discovering Amiina is akin to lifting the lid on some kind of marvelous celestial music box. The majestic Icelandic group, who first attracted critical acclaim as the exalted string section for compatriots Sigur Ros, are set to enchant their Cork audience on October 30th by conjuring magical melodies from an assortment of odd and wonderful instruments including saws, glasses, harps and various forms of zithers (look that one up).


Amiina’s María (full name María Huld Markan Sigfúsdóttir) recently took time out from the band’s hectic schedule to answer a few questions I had bubbling on my mind...


Cork is one of the few dates you have confirmed in your tour diary for the foreseeable future. Are you looking forward to the gig?

Yes, we are. It's always a pleasure to play in Ireland; the audience are always very open and lively.

Have you visited Cork before?

I'm the only one in the band that has visited Cork. I spent a few days there last summer with my family during the Reich Effect festival. We really enjoyed the whole thing: the festival, the city and the people. Cork reminds me in some ways of Reykjavik - the population is similar and people bump into each other in the street a lot, which gives it a friendly cozy feel.

Cork will be extremely busy when you visit as the world famous Jazz festival will be in
full swing. Do you have any plans to arrive early and soak up some of the atmosphere, catch some of the other performances etc.?

Some of us will arrive a couple of days before the show, and we'll most likely soak ourselves in jazz while there. I haven't had a good look at the program yet, but I'm looking forward to seeing Pee Wee Ellis (in The Savoy on Oct. 29th) at least.


Speaking of festivals did you break out your tents and attend any festivals during the Summer?

Not really - we don't really have that outdoor music festival culture here in Iceland, and since Amiina has been on maternity leave, we didn't play any this summer.

I was fortunate enough to catch your beautiful show in Dun Laoghaire last year as part of the Festival of World Cultures. You all seemed to be a little bit in love with Ireland’s own Caoimhín Ó Raghallaigh (contemporary folk and traditional fiddle player) who joined you on stage for a tune. How did that come about?

Our friend, Mary Hickson (Cork Opera House CEO), asked us if we were up for a collaboration with Caoimhín for the show. We agreed and it turned out to be very fruitful and enjoyable. Musically we connected instantly with Caomhín and the whole thing was very fun. He's a great guy as well as a great musician.


Your live shows involve members of Amiina running around the stage to play a vast assortment of different musical instruments. Did it ever come to a point where performances had to be choreographed to allow members to get to their instrument on time?!

Our performance was "choreographed" in parts, when we had even more instruments than we have now and fewer people in the band to cover all the parts. When playing small stages we had to go over all the changes and moves beforehand. It rarely happens nowadays, but still sometimes when it's crowded up on stage things can get a bit complicated.


To date, what is the the most interesting instrument you have found?

One of the great finds in the instrument field is a musical saw that used to be in the shed in my garden. It's a very normal saw, old and used, but the physics of it is excellent for playing; flexible and bright and is still today our most used saw.

Originally a four-piece, drummer Magnús Trygvason Eliassen and electronic artist Kippi Kaninus became permanent members of the group back in 2009. In what way has the dynamic of the band changed since becoming a sextet?

New people always bring in new ideas and energy. For us this change was very welcome. Our live shows are more powerful now with the addition of drums and electronics. It gives us a chance to be louder on stage so the overall dynamic range of our live show has grown a lot. 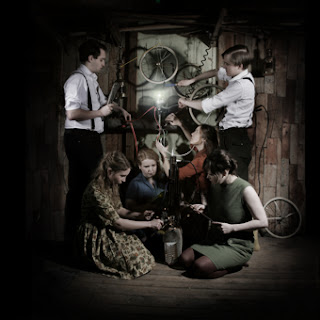 How differently did Amiina approach the recording of Puzzle compared to how you set about recording Kurr?

On Puzzle we did more recordings and work in our homes and rehearsal space compared to when recording Kurr. Puzzle was recorded over quite a long time, and in different locations. Also the fact that it was the first album we did all 6 together made the work different from before. It was refreshing to get new people in with new ideas and new work methods.

Kurr is mostly instrumental. Was it a big decision to have lyrics on Puzzle?

It wasn't a very conscious decision we made before composing these songs that they would end up having lyrics. Finding out a way to compose the lyrics was quite a puzzle. Since we're all singing it needed to be something we all could stand for and agree on. As soon as we found a way of working it, it was no problem.

I read an interesting article on the recent collaboration between Metallica and Lou Reed. Metallica admitted it was a mind-blowing experience as they have grown used to taking months to perfect each single note, drumbeat etc. whereas Reed just dives straight into the studio, plays a few takes and walks away. [When I woke up this morning I didn’t think I would be asking this question but] Would Amiina be similar to Metallica or Lou Reed in this respect?

I guess we would be somewhere in the middle. Sometimes we make songs and collaborate with people with our musical intuition only; we very quickly develop the music to its final form, whereas with some songs we can take a lot of time with countless revisions and changes. Personally I prefer the previous method especially when working with other artists - letting things happen in real time and try not too much to look in the rear mirror, trying not to be too conscious about things.

What items are essential when heading out on tour?

A couple of good books, sunglasses, deck of cards, some good music and good humour.


If you had to choose - what has been your favourite gig ever?

It's impossible to tell. I can't even remember all the gigs I've played. Last July we played in Germany at a Festival in Duisburg in a huge old steel factory - that was a great gig for us and a great audience.

One of the more special ones is when we played in Venice in the Icelandic Pavilion at the Venice Bienalle 2009, where our friend Ragnar Kjartansson was doing a 6 month long life performance/art installation. The atmosphere at the two gigs we did there was magical and the whole procedure with bringing all the gear in on boats on the canals was an adventure.


Earlier this year in Cork (in the Triskel Christchurch) Hauschka performed a live soundtrack to the silent movie Vampyr. It was one of my favourite experiences of live music this year. Have Amiina ever done anything similar?

Amiina has in fact a big side project going, where we play live music to a few short films by a brilliant filmmaker called Lotte Reiniger. These films are from the 20's to the 50's and are a beautiful silhouette animation set to classic fairytales (Brothers Grimm, Arabic Nights). We've travelled all over the world with this project - Australia Singapore, Jersey, London etc. and are very fond of it, since Reiniger's animation and our soundscape fit perfectly together.

If Amiina had to record a soundtrack for a classic movie what movie would it be?


Ireland is renowned for producing great musicians, sports stars etc. despite having a small population. Iceland has a population of less than 500,000 and yet has recently produced so many amazing artists such as Bjork, Múm, Amiina, Seabear, Sigur Ros etc. Why do you think this is the case? Is it something in the Icelandic water that the locals drink?!

This is a frequently asked question and I'm afraid I don't have a simple answer to it. The clichés are many; the pure nature, glaciers and equally tired.

If there is only one thing I was to mention, it would be the relatively good access we have to music education. The participation of the public in music at any stage of their lives is is very common (local choir, brass band etc.) and is very vital for the understanding and growth of the music life. If people have the experience of making music themselves, they have better tools of understanding and enjoying music better and support their kids doing so as well.

What albums are Amiina currently listening to?

I rediscovered my old Notwist - Neon Gold album today, it's a classic... Also new icelandic albums: Sóley - We Sink (check out a G-Man interview with Sóley's band Seabear from last year here) , Mugison - Haglel. And then there is some old and strange ones.


Are there any “unknown” artists/bands out there that you feel deserve a larger
portion of the spotlight?

There is endless music out there and a lot of it deserves more attention than it gets. One artist from Iceland that comes to mind is Skuli Sverrisson. He makes extremely beautiful but complex music - I would highly recommend his recent albums, Seria I and Seria II.

Australia and Tasmania in January, some more touring being lined up and a new album!

Tickets are available from both the Opera House box office and online at www.corkoperahouse.ie