The G-Man Interview w/ The Staves 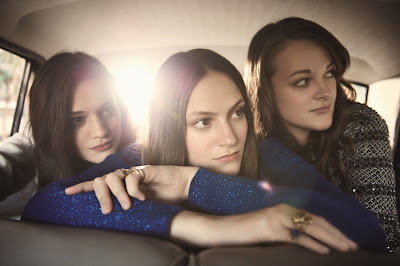 Watford folk trio The Staves have been gathering a growing number of fans in Ireland over the past few months with support slots for James Vincent McMorrow, Fionn Regan not to mention their own gig in The Academy last Saturday night.


So let’s start at the beginning : who exactly are The Staves and how did you come to be?

Well, we are Emily, Jessica and Camilla and we have been singing together all of our lives. About 6 years ago we decided to take it out of the kitchen and into pubs.

I actually first heard about The Staves during the summer via your own twitter account (someone retweeted one of your lovely messages) when you were promoting our very own Fionn Regan’s 100 Acres of Sycamore. The Staves, of course, sing on the album. How did the collaboration arise?

We've been huge fans of Fionn's since The End Of History first came out and so, when we were on the same bill as him at SoundCity in Liverpool, we gave him an EP. Then about 6 months later he called us and asked if we'd sing with him on his new album. Obviously, we jumped at the chance.


Was it through Fionn Regan that you ended up supporting James Vincent McMorrow?
No, that was a completely different link. The tour with JVM was ace and we had such a laugh with him and his band.

And supporting JVM resulted in your first (professional) trip to Ireland. How did you enjoy the gigs in Ireland?
We've been coming to Ireland since we were kids, actually. We used to go on family holidays to Kerry. We've gigged a bit in Ireland too : a tour with Christof (who is an amazing singer/songwriter - he'll be supporting us in Dublin on 26th Nov.), JVM, played at Sligo Live Festival, performed on RTE's The View and the Pat Kenny radio show! The gigs have been great and there's always something fun to do afterwards. The last time we played at Whelan's (with Mt. Desolation), we ended up busking in the rain with some locals and getting about half an hour sleep before our flight back the next day.

Are there any plans for a Staves Irish tour in the pipeline?
It's something we'd absolutely love to do and are working on putting one together for next year.
Not too long after I saw “that tweet” I got the chance to see you play a beautiful set at End of the Road in England. What are your memories of that gig?
What a lovely festival that was; One of the favourites we played that summer. I remember the audience being really attentive - and the hot spiced cider was nice.

I even got a chance to chat to you afterwards as you did with so many in attendance. Do you always interact with the crowd after your gigs?
Yes, it's good to have a chat after the show. It's also an opportunity to find out how it was for them, so to speak! We've always sold our own merch and it's something we really enjoy.

Have there been any other gigs in 2011 that particularly stand out?
If so, Union Chapel supporting Willy Mason was pretty special - he asked us to sing the last song of the night with him and the acoustics in that place are wonderful. We did a wee tour of the Scottish highlands too, which was beautiful. Oh, and playing at Dublin's Olympia with JVM, of course.


Both the best and worst thing about family is that you tend to be more upfront with each other, whether you like it or not. Does being sisters make it easier or more difficult to tour together?
A healthy measure of both!

Do you find it difficult to write personal lyrics when every member of the band who will be singing those very words with you are your own flesh and blood?
We're close, so it's not really a problem. We all attach different personal meanings to the songs we sing.

It must be tough to keep secrets?!
I'm pretty sure we know all each others secrets anyway! When can we expect your debut album?
We're still working on it (with our producers - Ethan and Glyn Johns), so it will be next year at some point. We'll let you know.

Facing West and your free live EP are very stripped down. Can we expect a larger sound on the album?
There are other musicians on our album, so there is a fuller sound, but we felt it was really important to retain the simplicity of how we perform live.

What music did The Staves grow up listening to?
The Beatles were on in our house a lot. Mum and Dad also played us James Taylor, Joni Mitchell, Simon & Garfunkel, Dylan - the usual.

Have your musical tastes diverged much since you were young? Is there any artist/band/music that one of you listens to that the others completely hate or simply not “get”?
Our tastes have developed, of course, but we still love the music we grew up with. We've all bought our fair share of dodgy CDs in the past...


What are The Staves plans for Christmas?
It'll be a Watford Christmas for us. With lashings of mulled wine.

Alternative/indie christmas albums and EPs seem to be all the rage this year e.g. She & Him, Gruff Rhys etc. Is there a particular Christmas song(s) that you like to sing and are there any plans for a “The Staves sing at Christmas” album?!
'Fairy Tale of New York' is always a winner. We're suckers for traditional carols too. Probably best just to sing them at home, though.

I understand you are all big Monty Python fans. Well... what is the air-speed velocity of an unladen swallow?
Is that an African or European swallow?

Touché! Tell me one thing about The Staves you have never told an interviewer before?
We're actually brothers.

What lies in store for The Staves in 2012?
We're going to America in January, which will be awesome. And we are working on another EP for release next year. It looks like it's going to be a tour-filled year and we can't wait!

End of the Road Fionn Regan Interview The Staves