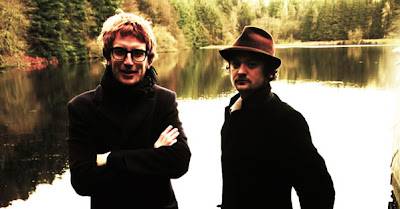 Inspired by Fante, produced by Benson and praised by Vlautin - The Lost Brothers sure know how to keep company. Yet the not-quite-so-lost duo (Mark and Oisín) remain focused on the only things that should matter to a dignified musician - writing and playing songs. Well.

For the next two weeks nearly a dozen venues in Ireland will get to see exactly how good the Navan/Omagh combination has become which already included last night's stop off at Linenhall Arts Centre in Castlebar.


Oisín (i.e. one half of The Lost Brothers) was good to chat a little bit just before the tour kicked off last night.

The Lost Brothers have recorded with Brendan Benson in the past. How did that collaboration come about?

Brendan has been a friend of mine for quite some time. I toured with him a good while back in my old band when we opened for The Raconteurs and then in 2010 The Lost Brothers did some gigs in Ireland with him. Brendan invited us out to record some songs in Nashville. He is a great producer [and] he knows the studio inside out. A wizard of sound.

And that’s not where the “celebrity” guests that appear on Lost Brothers recordings stops is it? Old Crow Medicine Show, Richard Hawley’s band, members of The Cardinals. The Lost Brothers are the guys to work with these days aren’t they?!

It's a friendship thing and over the last few years we have been lucky enough to meet some really great musicians and make music with them along the way. Richard Hawley, the Old Crow, the Cardinals are all players we admire and respect greatly. Richard [Hawley], Gill [Landry - OCMS] and Brad [Pemberton - TC] are also good friends of ours. The fact that they are well known is neither here nor there.

I am going to take a wild guess and say you are John Fante fans! How big an influence has the great man had on your music?

We love his books and they became travel companions for us while we made this new album (So Long john Fante). 'Dreams From Bunker Hill' is up there amongst my favourite books of all time. His characters are sometimes heroes and fools at the very same time. Sometimes these characters appear in a line or a verse of our songs. His stories cut right to the bone like a Hank Williams or Andy Irvine song.

Folk - and to an extent country (or at least alt-folk/country) - seem to be pretty “cool” these days with Fleet Foxes and Bon Iver unexpectedly storming the charts over the past couple of years. Would you agree?

We do our own thing and pay no heat to trends or what other bands are doing. We've been making this music for years. People seem to just throw so many bands into this "alt folk/cateogry" category when there is a lot more going on in the music of bands like Fleet Foxes and Bon Iver, if people really listen.

In saying that it is probably a good time for The Lost Brothers to arrive on the scene. Do you think this "movement" has helped you build a foundation as a force on the music scene?

I have no idea. We just play gigs and make records. If people enjoy the gig or the album then that's great. I don't see Lost Brothers as a force on any scene, nor do I see us to be a part of any scene. We just write songs and sing them.

"The Lost Brothers are the real deal. So Long John Fante is my favorite record of the year so far."  Willy Vlautin

Kind words from Willy Vlautin (Richmond Fontaine) have probably done no harm either. What does it feel like to hear such positivity from such an incredible songwriter?

You're right, he is an incredible writer. This quote from Willy was sent to us recently by someone and we were really blown away and honoured that he even listened to our album. We're big fans of Willy's books.


What do you feel are the biggest positives about being selected for The Certain Three tour?

I am excited to see Katie Kim and Puzzle Muteson play live. From the music i've heard from them so far it will be a great tour. It's the first time we will do a good run of shows around Ireland. Looking forward to it and to meeting people around the different towns. It's good to tour when we have just released the So Long John Fante album.

A standard Irish tour a few years back would have only included the major cities i.e. about 5 gigs possibly including Belfast. The ten dates booked for The Certain Three shows that the Irish tour is expanding doesn’t it?

Yes and thats a good thing. In places like Navan there is a lot of great music quietly bubbling under the surface. My sister Saramai Leech (Saramai & The Swords) is getting ready to make her debut album and she is from Navan. It's good for the musical trail to expand and the more unusual venues will end up being the best gigs. [Also] looking forward to playing venues like Pine Lodge in Myrtleville, Half Moon club in Cork, Spirit Store in Dundalk too. Swan Lane in Navan.Waterford. Limerick... It all starts on the 12th in Castlebar at the Linenhall Arts Centre.


What do you hope to have achieved come the end of The Certain Three tour?

I hope to have done ten good gigs around Ireland and to have given it my all. Maybe meet people after gigs who came down to hear the music. Grow a good beard.

Ten tour dates and I am guessing multiple live appearances on radio, tv etc. Is this the most intense batch of touring you have done or are you well used to it by now?

Mark and i have been playing in bands since we were 16 and we have been lucky enough to have toured quite a bit but this is the first extensive Irish tour and we can't wait. We are from Omagh and Navan and have always wanted to tour ireland on a tour like this. Good timing with the new album out I suppose.

Are there any essentials that you have to bring on tour in order to survive?


You recently toured the U.S. How do you feel the tour went and what were the highlights?


We love playing in America. We love the record shops and the French toast. 2011 was a great year for us - seeing Levon Helm (legendary drummer/vocalist with The Band) play and sing in Woodstock was a highlight. He is still a superb rock n roll drummer and a total gent too.
Other Voices New York was another highlight. The atmosphere was electric and we were lucky to watch it, let alone be a part of it.

2011 was pretty eventful for you (to say the least) including an appearance at Electric Picnic, releasing the album, Other Voices NY etc. It is going to be tough to top all that in 2012 isn’t it? What are The Lost Brothers plans for the new year (besides the imminent Certain Three tour of course)?

2011 was a good year. Playing Electric Picnic was great fun. They treat the bands so well at that festival and we love it. Electric Picnic was where Mark and I first started singing together at 5am in some old circus tent. Who knows what 2012 holds...

We plan nothing and we will just have to take 2012 as it comes. The Late Late Show have asked us to perform on Friday 13th and Brendan Benson has started a new record label called Readymade Records and he will release the third Lost Brothers album on his label so that's exciting.

We like to keep things busy at Lostville. As long as we keep writing songs that mean something to us then we will be okay. We are very lucky to do what we do and enjoy it [and] have a strong vision of where we are going next in terms of songs and that's all that matters to us. Songwriting is fuel for the fire and we're learning all the time.