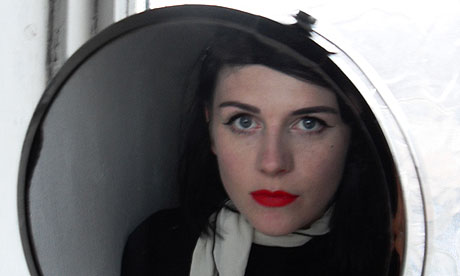 Hard to believe the last crumbs of February are already set to be hoovered up but what is very believable is the fact that Cork is set for another week jam-packed with musical goodness.

Gig of the week comes from Plugd Records in the form of London's Paper Dollhouse who will grace the Triskel auditorium on Saturday (Feb 25th) with gothically-twisted, minimal folk. For those who missed the interview with Astrud from PD click here to catch up.

GoodCop "Do not mention Jonsi" BadCop promote an early Crane Lane show featuring a triple bill of the the U.K.'s Poino (featuring members of Giddy Motors - check the blog later this week for an interview with frontman Gaverick De Vis), The Richter Collective's Hands Up Who Wants To Die and the recently awakened from hibernation Private Underground Residence. All three play on Thursday (Feb 23rd).

Another gig definitely worth a mention (hopefully) sees the return of another Popical Island group in the form of Grand Pocket Orchestra - set to release new album Ronald and Sylma on Friday - on Thursday night in....well we don't know where due to the closing of An Realt Dearg's doors. Will keep you posted once the new venue is confirmed.

Elsewhere we have electronic workshops and performances aplenty in The Pavilion with the Cork leg of the Lightbox tour featuring Bantum, Reid, visuals from Feel Good Lost and more on Thursday (Feb 23rd); Passage-West chanteuse Camille O'Sullivan entertaining the Opera House on Friday (Feb 24th); Former Monarchs and Hope Is Noise assaulting eardrums in The Pavilion that same night.

Sunday (Feb 26th) wind-down comes in the form of Carried By Waves ear-massaging electronica which should feature his recent excellent remix of Ten Past Seven's 'Orientation' in The Pavilion as part of The Sunday Sessions and/or folk-fillies The Henry Girls rootsy but heavenly harmonies in the Half Moon Theatre.

Wednesday, February 22nd
- Bounce Back: A Month's Mind featuring Brian Deady, The Papa Zitas, The Roaring Forties, The Booty Band and GMC in Cork Opera House
- Eddie Reader in The Pavilion
- Fireside Sessions with Sara Corkery and Brendan Butler in
Mr. Bradley's of Barrack Street
- UCC Battle of the Bands - Heat 3 in Cyprus Avenue
- Dead School and Half Man Part Bicycle in An Bróg

Thursday, February 23rd
- Foxglove in The Roundy
- Lightbox Tour with Bantum, Feel Good Lost, Monto, Reid, Sert One, Simon Bird and Tenaka in The Pavilion
- Poino, Hands Up Who Wants To Die and Private Underground Residence in The Crane Lane Theatre (8pm)


Sunday, February 26th
- The Henry Girls in Half Moon Theatre


- Tenonsaw (EP launch) in The Roundy
- Bangsambra in The Crane Lane Theatre (10.30pm)
- Carried By Waves in The Pavilion