IMPORTANT UPDATE: Friday's gig with The Bridges of Madison County and guests has been relocated to the Triskel Theatre Development Space, Tobin St., Cork.

Sine wave assassins and frequency-noodling ninjas turn Cork into their own personal battleground next weekend as the city plays host to Days On End, an intriguing new sonically-charged music festival. Organised by various members of Cork's resident sensor shifters Mersk, Rory O'Brien filled me in on the details such as...

What exactly is Days On End?

Rory: Days On End is a Festival with 'sound' as the focus. There's gigs, a workshop and an open call 24hr free-form improvised performance to top it off. This February is a small scale version, a stop on the way to a larger scale festival in the future.
Who are the organisers, what are their backgrounds and how did the idea come about?

With so much experimental music going on in the city a few of the lads from Mersk (including myself) thought it was important to highlight the abundance of performers scattered around disparate events. Mersk consists of players from all sorts of backgrounds - it's a bit of a microcosm of the festival itself. From the proliferation and success of other events we felt that there was a larger audience, outside of the one that is already there for experimental stuff.

Is there a relation between days on end and the sonic vigil events that have taken place in Cork previously?

Mick and Danny of The Quiet Club (curators of Sonic Vigil) were there at the first meetings about the festival and have been helping us out along the way. Without Sonic Vigil, Black Sun and many other events 'Day's On End' wouldn't be possible. Saying that, we felt it was important to have a new festival with some fresh spin. Also this festival is being run without any funding at the moment so we needed to start from scratch and prove ourselves.

When does Days On End officially begin and with what event?

Official launch of the festival is 10th of Feb in The Roundy with a performance by the Quiet Club and a film 'Gasp at End'. Private Underground Residence's gig on Thursday in An Realt Dearg will be a warm up before the festival kicks off proper.

Who are the headlining artists and what can you tell us about them?

The Sample Studios gig on Friday (since relocated to the Triskel Theatre Development Space, Tobin St., Cork.) will be 3 acts.

The Bridges of Madison County: 4 piece group from dublin - "The Bridges of Madison County make music that is dense, intense, discordant and claustrophobic: a sound so thick it's almost tangible. Blasting trumpets, wild drums, and frenzied guitars compete for limited sonic space. However, through this noise floats beautiful, delicate melodies and poignant, political lyrics. Oh yeah, and they have a sense of humour. Absolute art."

The Glamour and Prestige of Diarmuid MacDiarmada: Dublin Experimenter - "The show is about the idea of entrancement and will probably involve some talk and some visualisation exercises as well as a long-form exploratory trance music piece"


For such a specific festival how did you go about selecting the artists?

I thought selecting artists would be tougher than it turned out to be. The centre piece of the festival is a 24hr freak-out ('On') so it was really down to finding bands or artists that thought something like that was a cool idea and were up for taking part in that really. We talked intensively about it with the group; Paul Hegarty of S.A.F.E. was also a big help. In the long run we hope that the festival can be open to decent range of music that ties together at the core with a common bond of experimentalism and unorthodox methods of sound making and performance.

What venues are involved?

Day one has the launch in The Roundy followed by Stet Lab. Day two begins with an instrument building workshop in the National Sculpture Factory followed by the beginning of 'On' - the 24hr continuous sound performance at Sample Studios. There will be a lunch at The Guesthouse on Sunday with a very limited capacity. 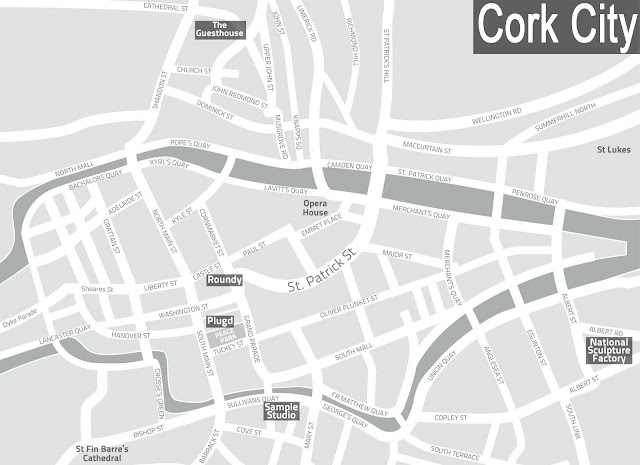 The festival is not only focused on music though is it?

Sound experimentalism can often be seen as self indulgent or left completely linked to the art world. It is often completely justified by it's accompaniment of film and theatre etc. Making sounds can have so much more significance, first of all as a stand alone form of entertainment but also as a gateway to learning (about electronics and code for example). Abstract sounds are also very important in the understanding of music therapy and technology and technologies that push the boundaries of sound production often can be used as tools for those with physical handicaps. There is also a communal and inclusive aspect to improvising with enharmonic sounds.

Cork is a relatively small city and Days On End may be seen as a specialist festival. Do you feel there is a large interest in experimental music in Cork?

Cork seems to be the right size for a lot of cross pollination between musicians from different disciplines as well as artists of all kinds. I also have a feeling that Corks tongue and cheek nature has allowed people to experiment without too much destructive criticism. A city this size has quiet spots which is very important to appreciate sounds. We hope to show by doing a festival like this is that there is a much wider audience for these sorts of events.

There is a couple of fringe events taking place earlier in the week? Have you more details on these gigs/happenings?

We'll be putting the word out about the P.U.R. gig on Thursday 9th but it's not on the official schedule. Rest and 7:10 will be testing the structural integrity of Sample Studios on Saturday 4th. I'm sure there's a few the events that would totally fit into the criteria of the fest.


What can you tell me about the festival's finale On?

'On', at it's heart, will be a gathering of sound improvisers and listeners for 24hrs. Pretty much a continuous jam for a full day. There will be events through out the 24hrs: some audio, some visual, some performance and there'll be veggie and vegan food by Veg Out (Sam will be making Chilli and Tajine) and the amazing Suger Moon cakes will be on offer. We'll try and let everyone know about any scheduled stuff through twitter. We also have artist Irene Murphy taking residency in the Tactic gallery space.

- Days On End takes place across various venues on the weekend spanning the 10th-12th February
- Tickets for all events including Rest/Tenpastseven are available from Plugd Records on Tobin Street
- See www.daysonendfest.com for more details