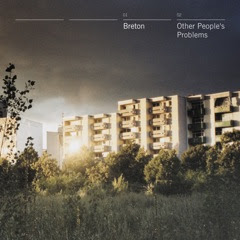 "Other People’s Problems” seditious sound was formulated at the band’s creative HQ The Lab, a disused bank in Kennington, south London. It’s here that this outfit live, rehearse, and make their music. It’s also where they create their films, videos and remixes with meticulous attention to detail under their cinematic wing BretonLABS.

The band then took their album from the dingy grey urban surrounds of the Lab and relocated to Iceland for a week to record it at Sigur Ros’ studio in Reykjavik, which added yet another dimension to its sound. The final task was the addition of brass and strings. Breton sent some basic parts to German composer and personal hero Hauschka in Berlin, who recorded them with an orchestra of violinists, cellists and trumpet players to create an incredible piece of music worthy of a film score. He sent back the parts to Breton who then chopped up and sampled them into select album tracks – so the classical was redefined. And with that the album finally reached the end of its own game of “The Exquisite Corpse”."