"Bigger and better than any sweet shop I had ever been in."
Over the next five days this bashful little blog will feature interviews with various bands, artists, record store owners etc. ahead of the fifth annual Record Store Day.

Electro empress Gretta Gunn tells The G-Man what records mean to her.

Gretta Gunn: I remember being led by my hand down to Golden Discs in Dun Laoghaire at the sweet age of 6. I was told to pick a 7" I liked the look of. The shop was bigger and better than any sweet shop I had ever been in with loud music playing that made me dance around the shop. I was so excited I remember needing to wee from the excitement. After picking up lots of records I decided on 'Pass The Dutchie' by Musical Youth - it was bigger than my little face.I think I fancied the little boys on the front! I was so proud to own a record. I hugged it all the way home in the car. Once we did finally arrive I pulled the magic disc out of its sleeve, put it on the record player and danced for hours! I played it day after day! I was hooked. 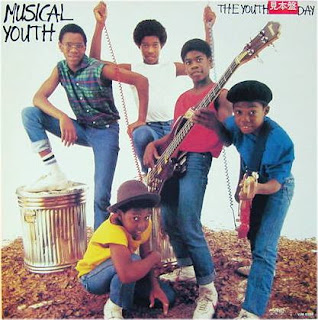 I used to hold the sleeve and just look at the photo and smell the lovely paper sleeve - strange I know! The sound of the needle touching the vinyl still brings me back to that day. Today I still buy vinyl and always will I hope. What value for money: You get great warm Sound, size, tangibility and big artwork. Owning a record gives you a lot more than just music. It's artwork and written words from the musicians you love, remember?!

We live in a tech generation and everything is getting smaller, one click and music is yours. Sound quality has died... Still, there are beautiful pieces of artwork that you can own and keep forever, touch, read, smell (if you're like me) and most of all it is the best sound you will ever have massaging your ears.

What do you make of the importance of record stores?

Independent record shops are dying. All of us musicians will die with it. Well, not really, but try and understand that the joy of making music, designing your Artwork and writing your bits and bobs is what makes us tick. It's important to produce objects. If the satellites fall from the sky, what then? No music to listen to iTunes people! Bring records back to life. Full albums, singles, EPs, Box sets. Start Collecting now! Buy a record player and sit and rest for a while, open your ears and hear the difference.

Some of my choices in Dublin for vinyl would be R.A.G.E Record Store on Fade Street, All City Records on Crow Street, Elastic Witch in Twisted Pepper, SpinDizzy in George's Street Arcade, and, of course, Tower.

If you owned your own record store, what would it be called?

If I had a chance to own a record store one day, I would call it "Easy".

Inside I would have couches, great coffee and cakes, board games, books and a massive vinyl collection and maybe even bring the cassette tape back. Lots of record players and old ghetto blasters and blankets. A smoking area with more record players so you can listen while you smoke. If it's in Ireland hot water bottles will be provided too! I would let people listen and get lost in comfort. Now tell me that this would not be a magical place and make people buy records again.

Record stores will die if we don't start buying again so get off your phones and computers and start the support again! Support record stores, support musicians! You can start with my lovely EP - The Hunt. It's a fancy object: 10 inch white vinyl (plug! plug!).