Posted by The G-Man on May 03, 2012
"My potatoes were the biggest!"
Swirling black clouds of alternative excellence descend upon Phoenix Street this weekend as The Crane Lane is willingly washed in a dark wave of Southern Gothic proportions. From the psychadelic folk of Hush Arbors and Arbouretum to the misunderstood brilliance of anti-folk icon Jeffrey Lewis, Bandicoot Promotions have prepared a bank holiday weekend banquet for lovers of the weird and different to feast on over the coming days.

One such dark jewel in the SG crown comes in the form of founding Atari Teenage Riot member and original riot grrrl Hanin Elias, recently returned to the western world after a self-enforced break in French Polynesia. The G-Man caught up with the Berliner to chat before her upcoming dates in Ireland.


What was it like to return to releasing albums in 2011 with the release of Get It Back?
I worked constantly on music during my stay in French Polynesia, just because I don't know how to live without turning feelings into music. When I decided to go back to the western world, it was because of music mainly. It felt great to put the songs out on a CD finally and get back into my calling.

Why do you think it was time to return after such a long absence?
I needed a break, a change of life and thoughts. I lived on a small island for 5 years, learned how to fish, live a simple life and learned 2 new languages and joined another culture and mentality. I had to go back because i wanted to do music again with all my heart and soul. I had the feeling that my batteries were full again and that i could come back with a changed mind and temper.

Were you chomping at the bit to get back into the studio or did it take a while to dust off some of the cobwebs?
I had a little studio in French Polynesia and because lots of the songs on the album Get It Back were collaborations, they where done in different studios all over the world. I never forgot the smell of studio air.

What aspects of Get It Back were you most proud of when it was finally finished?
I'm just proud that it all sounded so well altogether because the songs were recorded in a long period of time with different musicians and even different styles of music. In the end it all fits well enough to be proud of it. It was really improvised and free. I decided very spontaneously that I would release these tracks as an album.

Why did you chose Rust Blade release the album?
Stefano Rossello contacted me and really showed me that he wanted me to be an artist on his label very very much. He made a lot of effort to get me on the boat. He also is a very honest and loyal person and after a while testing him and the label policy I decided that I prefer a smaller label rather than a big one that has no soul and empathy for their musicians.

In the past you have labelled yourself "a terrible business head". How relieved are you to release the record on somebody else’s record rather than your own?
I hated having a label (Fatal Recordings) in times of the breakdown of the music business. Whatever you do, the "nothing" eats you up faster than you can be creative. It really sucked away all my energy. I feel good that Stefano is still brave enough to release Music in these days. 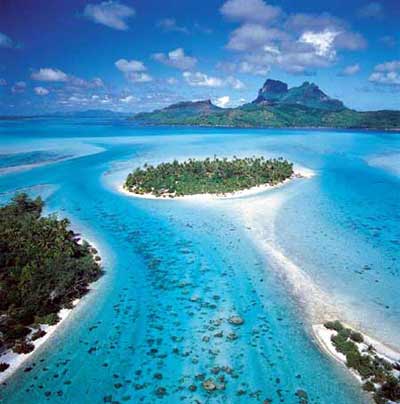 Care to share any fond memories of your stay in French Polynesia?
I loved the colors, the ocean, the crystal clear water, the smiles on people's faces. The fish and the nature. I lived in a local house by a green lagoon and hibiscus flowers and Tiare surrounded me. Mosquitos bit me day and night and I mostly ate raw fish and sometimes dog. I went fishing with a spear-gun and paddled in a kanu. I planted huge gigantic potatoes called ufi and won a medal for it; My potatoes were the biggest!

In what ways do you feel that break/stay has changed you?
I got much calmer and more patient. I can tell that the simple things of life can keep you from going crazy or neurotic. The stay on that beautiful island makes you automatically less aggressive and more in peace with yourself and others. I lost my hate and found a lot of tolerance and thankfulness. You can say it turned me into a hippie...but only to a certain amount.

How does it feel to constantly be labelled "the first riot grrl"?
It doesn't really fit anymore but i got used to it.

What did you make of the recent OCCUPY movement that took place in hundreds of cities across the globe?
It's the most exciting movement that happened for a while and I just played with my bandmembers (David and Maebh Murphy from You're Only Massive - both from Cork!) in Oakland at an Occupy meeting! The people seemed very bureacratic at first and held endless talks and tried to be as open as possible, everyone could speak out their mind about any concern. Tt seemed endless but when we rocked the park in which we played they all had a great energy and I could feel their need for a change in the Air. It was wonderful!

Anger levels for the Irish government are rising constantly but still the majority of Irish people roll over and take the shit they dish out. There is a theory that, due to Ireland’s history being steeped in hundreds of years of blood and war, that people are just not ready to
rebel en masse again so soon so remain passive. What do you think?
I think it's religion and suppression that has the most influence on people passiveness. If there is still enough to eat to be full, they prefer to do it the next day, and the next morning they still don't feel that urge to really defend their souls because they still have it better the way it is then risking their lives for a change.

I came to the conclusion that the government is just a reflected state of mind from the majority of the people in a country. They need someone to blame because they don't have a better solution. A good idea brought into action could make an end of it very fast. If you are just against it but you don't bring anything else to make it better, than it's just a general frustration that will bring self destruction and more unsolved problems.


One problem Ireland has been left to cope with is the collapse of the property market. A silver lining has been that artists, bands etc. have taken over many unused, repossessed properties turning the buildings into art spaces free of rent without any outside interference (so far anyhow). How important is it for young (and older) people to have their own space to experiment?
It is the most important. But this is what happened in New York, Berlin and elsewhere. Young people turn an area into a creative paradise and then the rents rise and they have to leave again.

The major record labels are in turmoil these days but the progress of technology means that their existence has pretty much been made redundant anyway. What do you make of the whole scenario?
They try to put barriers where we are used to share things without boundaries, on the net. I have a big problem with that but it's necessary for musicians to get an income. DIY is the most effective way to get your music across nowadays. I have no idea how to deal with the scenario. I work on my next album and really don't know how to deal with it. But I guess somehow it will spread anyways!

Outside of music, what do you most enjoy doing?
Sex and reading, mostly.

What can Cork/Ireland expect from Hanin Elias in May?
I will come with my two band members Maebh on synth and Dave on guitar and we will play you songs from my new album and some surprises! I want Ireland to rock with me as if there were no tomorrow!