"Pandemonium", is how virtuoso Chic guitarist Nile Rodgers remembers his last trip to Cork. Speaking from his hotel room ahead of his recent show in Galway, the legendary writer and producer behind a slew of number one hits for pop royalty such as Madonna and Sister Sledge is in fighting spirits.

With ageless enthusiasm, 59 year old Rogers has produced Duran Duran, David Bowie and Peter Gabriel, soundtracked eighties movie greats (Gremlins/Coming To America) and been accredited with providing the foundations for hip hop when Englewood trailblazers The Sugarhill Gang sampled Chic's 'Good Times'. Next on the agenda for the man who served his musical apprenticeship as part of the Sesame Street house band in the 70s, is an album with electro-pop duo Daft Punk.


The G-Man: Hi Nile. Thank you very much for taking some time out to chat ahead of Liss Ard 2012. What memories do you have of playing the Savoy in Cork in 2010?
Nile Rodgers: Pandemonium, insanity. It was really incredible and we had great fun. The most vivid memory after the performance is, as we were driving back to the hotel, a couple of guys were running down the street and wanted us to sign their chests. It was freezing so I was like 'Yo guys, are you aware of the ambient temperature right now?'. The nuttier the audience the happier I am. It was a really really awesome day and I'm so happy to be back.

The positivity flowing around the city after that show was really something. What does it mean to be able to play such uplifting, fun music to such large crowds on a regular basis?
Certainly when I was younger that's how I envisioned my life unfolding. You sit on the end of your bed practising music because one day you want to become a composer and get out there and play for people - the reality has dwarfed the dream. It's too amazing for me to even comprehend.

The other day we did a three hour show in Montreux and they cut out five hours - we were trying to do twelve straight hours of dance music. We had La Roux, Johnny Marr, Grace Jones - it was an extravaganza and at 5am when the police were shutting us down the whole crowd was going 'more, more, more!' It was insane and we hadn't even touched our set list. We/Chic played almost three hours with another two hours worth of songs to go. It just made me realise how many songs I've written and produced in my life and just think I haven't done that type of work for 17 or 18 years, like my last really big record was The B52's 'Cosmic Thing'. I mean it's pretty amazing! (Laughs)

That's just incredible!
I know it's extraordinary. I'm always playing on other people's records and doing new work. In the last few months I've played with Daft Punk, Scissor Sisters - an endless group of people. I love rolling into the studio and playing my thing. My life is extraordinary, way beyond anything I could ever have imagined and I have a pretty good imagination!
You - and the band follow suit in this - are always happy to go out and chat with the crowd and take photographs which is not a very common thing for a world-famous group. Do you feel mixing with the crowd makes the memory more vivid?
Well a year and a half ago I was stricken with cancer and it was really aggressive. It was the kind of thing that when I first heard the doctor give me the words it almost felt surreal - it didn't even mean anything to me. Cancer as far as I was concerned seemed like something from a far galaxy. What do you mean cancer? That's not a rock n roll disease! That's what your grandparents get. And it made me look at life a little differently and start to realise the time that I spend on earth, the time that I have with the fans and doing these gigs and doing what I do is very, very precious and I want to document as much of it as possible.

For me it feels really great to hang out and take pictures with the fans but the by-product is that no matter what country I go, no matter what city, I have friends! (Laughs) I look out into the audience and I go, 'Oh, that's Sean! Oh my God that's Will!' I mean I actually know people. The median age of a Chic fan is around twenty something years old and I gotta work really hard to find someone my age. When I'm outside shaking hands with everybody and they go 'Oh, Mr. Rodgers I've been listening to your music all my life' and I go 'How old are you?' and they go '35'. Oh, really? All your life? I wrote this stuff thirty five years ago!
The festival circuit helps with perpetuating the music of Chic too does it not?
Doing festivals for us is really great but we really have to do something about this weather, it's ridiculous. And since my partner Bernard [Edwards] passed away Chic always wear white to pay tribute to him because when I went down to the morgue to identify his body he was in a white kimono with a glass front and they built a temporary alter. That last vision of him was so beautiful that's why we wear white. Now when we do festivals we have to walk out onto the stage in garbage bags because we don't have wellies. Come on guys give us one summer of nice weather!
I know, I have to live here.
(Chuckles) The other day we did a show [in Ireland] and it was absolutely freezing and they were hitting around beach balls and stuff and I was like okay right, so I guess we're pretending to be at the beach now but it is absolutely frigid.

Yeah, Irish people go to the beach when it's about ten degrees.
(Laughs again) I guess they have no choice. 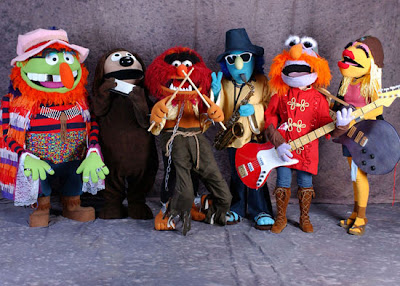 Taking it all back to the beginning, you dropped out of Juilliard to go on tour with the original Sesame Street house band.
I didn't quite drop out because I didn't wind up getting in; The first day I walked around Juilliard and Manhattan School of Music I was looking at the bulletin board trying to figure out which school was the best for me to study classical guitar and there were auditions for the touring band Sesame Street. I auditioned with my funny green hair and got the gig. Actually, in retrospect, maybe it was the green hair that got me the gig!

You once stated that members of that band drew a certain parallel to the characters of Sesame Steet themselves, living and working harmoniously with such diverse characters. Do you think the 70s was an easier time to be involved in that and making music generally?
It was. This is not egotistical, honestly it's just factual but making music for me is easy because music is always going on in my head - like a chatter. It's just a continuous soundtrack to my life triggered by what I see, hear or what I smell. There's always melodies playing [in my head] which is why I've been able to do so many jobs. I mean I'm never at a loss for a musical idea because there's always these motifs going on.

...and the illusion of celebrity didn't exist so much back then and you were able to meet and hang out with established musicians like Jimi Hendrix.
Believe it or not throughout my entire childhood  it was all every day stuff [meeting celebrities]. When I worked in the airport in Los Angeles people like Frank Sinatra, Sammy Davis Jr., Roy Rogers and really big movie stars like John Wayne and Marilyn Monroe would come in all the time. I never saw one bodyguard in my memory. Frank Sinatra had an entourage but no one had a bodyguard. I don't think I saw anything that looked like a bodyguard until I worked with Mick Jagger in 1985 - and his bodyguard was actually his driver. Bowie and Hendrix would just walk around when I was a kid.  Miles Davis, Thelonious Monk - very famous people - would just walk around so I didn't grow up with that sort of "star" mentality.

Tell me about the The Big Apple Band, which followed.
That was the band that backed a group called New York City. We had one big hit called 'I'm Doing Fine Now' (sings the intro). Anyway, we gigged on that record for a couple of years with The Big Apple Band and, having our own fan base, we wanted to do lots of gigs because whenever New York City wasn't gigging we would actually gig on our own. We wound up having to change our name to Chic because a guy called Walter Murphy came out with this brilliant record called 'Fifth of Beethoven'. You know the disco record (proceeds to sing me another sing live from his hotel room)? He came out with that record as Walter Murphy and the Big Apple Band and everybody thought that was us. They were calling us up, congratulating us and I was like 'uh...not us'. So we changed our name to Chic and I guess it was a good thing because the rest is history.