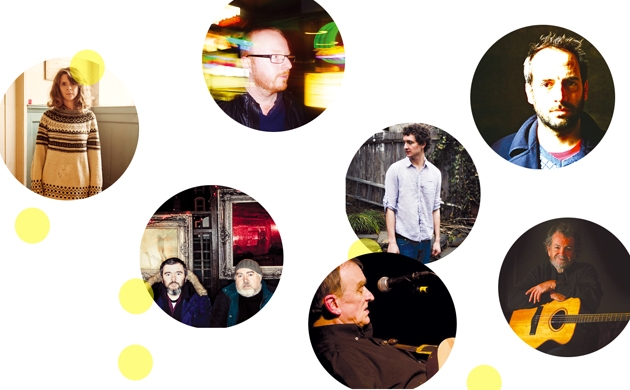 "Lots of songs about sex...and the moon."
Aidan Moffat
Two extraordinary nights of musical storytelling and technical excellence were wrapped up last night as the Cork Midsummer Festival's star-studded Bowerbird was drawn to a close.

Co-curator and host for the second night running, Adrian Crowley welcomed English harpist Serafina Steer on stage to claim the prestigious honour of the only guest to perform on both nights. Highlights from the previous night 'The Night Before Mutiny' and 'Skinny Dipping', got another run-out joined by another batch of new compositions - such as 'Island Odyssey' (written about a friend's attempt in vain to get away from it all on the tiny island of Gometra, just off the Scottish coast) - that will feature on the recently completed Jarvis Cocker new album. Another recognizable arrangement from last night comes in the high-class form of 'The Countess', which originally appeared in WB Yeats' 1892 play The Countess Cathleen. Steer's performance is not quite as stirring as last night's yet still proves to be a more than adequate introduction to Bowerbird night 2.


The sullen shadow of Malcolm Middleton slinks onto the altar next, set to preview material from forthcoming album and the Scotsman's latest reincarnation, Human Don't Be Angry. As was the case on Friday , the second performance of the night features electric guitar with a swelling instrumental piece - layered methodically with the help of a loop pedal - easing the former Arab Strap guitarist gently into his set. Renowned for possessing a sharp dry wit (the button-lipped audience, who have barely breathed aloud during the course of the two nights are warned "Sshhh. Quiet...you're in a church" ) and a penchant for swearing (see such song titles as 'Fuck it, I Love You' and 'Ballad of Fuck All', it is pleasantly arresting when disarmingly tender lyrics like "you and I are still dancing when the songs are finished" raise their heads. The Falkirk native's obviously knowledgeable use of digital delay and gritty overdrive occasionally atop some space-filling beats are second to none but it's the simplistic nature of the gorgeous 'Little Hurricane' that stands out as the highlight of the forty minute slot.


It's not often you get to witness live an artist who has inspired and influenced the likes of Bob Dylan, Paul Simon and Richard Thompson but that is genuinely the case with the penultimate act of another thoroughly enjoyable night in the Triskel. If the aforementioned are legends - and they are - then I am stuck for superlatives to describe English folk master(?) Martin Carthy. Born in Hatfield and raised in North London, the much beloved traditional purist is a walking encyclopedia of not just folk knowledge but of the world in general, enthralling onlookers with titbits such as fellow trad aficionado Nic Jones' discovery of long forgotten ballad 'Sir Patrick Spens' (craftily hidden within a songbook stored in every library across Britian) and the realisation of the ability to learn a song upon a single listen thanks to one stubborn peer's point-blank refusal to share the lyrics and chords for one tune in particular. One of the most enlightening history lessons ever received or simply an excellent gig. Either way, job done well Master Martin. Incredibly bloody well.


And so the end of the illuminating Bowerbird adventure is nigh as another Falkirkian storyteller strolls out front and centre. Accompanied by pianist Bill Wells, his partner in crime in the creation of 2011's Scottish Album Of The Year Award-winning Everything’s Getting Older, Aidan Moffat is also joined by a double bass player and a trumpeter with very jazzy consequences. "Lots of songs about sex...and the moon" are promised but references to drugs will be at a minimum tonight as the seated Wells leads into the joyous 'Let's Stop Here', an ode to a happily settled down man's doubts punch-lined with deliciously primal lyrics that have become synonymous with the majority of Moffat's work - "to squeeze a fist of hair, to slide my fingers underneath your dress". It's not surprising that the entire set is comprised pretty much of all songs from the 2011 record including the David Lynch-esque recital of the threatening 'Dinner Time' (accompanied by spooky trumpet, manic spotlight and red velvet drapes looming menacingly in the background), the bopping bassline of 'A Short Song to the Moon' (the promised "moon" song complete with fifties trumpet solo) and the surprisingly amazing 'Cruel Summer' (their Bananarama song, literally a tune from the 80s pop stars). All in all a perfectly fitting end to the second wonderful evening curated by Adrian Crowley and Gary Sheehan. Fingers crossed Bowerbird returns for the 2013 edition of Cork Midsummer Festival.