Hey Peter! Where exactly in the world are you right now and what are you currently up to?
I’m at home in Limerick working on the artwork for my new album and putting together the next episode of the radio show* I do for the local online station XLR Radio.

Friends of mine are just back from touring mainland Europe where they were greeted with waves of positivity and enthusiasm. Being well travelled yourself, why do you think Irish singers/bands are received so warmly on the continent?
I noticed that people tend to warm to you if they know you’re Irish so you don’t have to try so hard to win them over. We’re very lucky!

Care to recount any fond memories of your own travels?
Any of the tours I’ve done with friends have been great fun. The gigs were really good but the laugh you have with other musicians when you’re travelling around would be enough of a reason to go on tour.

As regards playing live what are the pros and cons of touring solo?
The ukulele is probably the perfect instrument to tour with. I can take it on as hand luggage when I’m flying and having such a simple set up live is really handy too. Sound checks don’t take long at all. If I’m touring by myself I really enjoy walking around new cities and taking my time. It can get a little awkward after playing a gig if you don’t know anyone though.

A folk revival has really taken hold in the UK over the past couple of years. Have you played the UK much and if so how were you received?
I’ve played a few times in the UK and I think I went down well but as far as I’ve heard the folk scene there is very closed off. I haven’t played to a lot of folk audiences so I don’t know from personal experience but it seems that it’s a difficult scene to get into. They have a lot of high profile folk singers and it’s quite a conventional genre there so it’s probably not going to be easy if you’re coming at folk music from a more playful approach. The alternative folk musicians I’ve seen and played with are much more interesting to me to be honest so I’m not too worried about it.


Contemporary folk in Ireland is surprisingly, well maybe not rare, but not plentiful anyway. The "singer-songwriter" label was bandied about for a few years though and many, especially in the alternative world, turned their backs on solo folks with guitars. Would you agree?
Yeah, I think that’s true. There was a big trend for bland "singer-songwriter" music and it understandably repelled a lot of the more active music listeners. There’s a negative knee jerk reaction to seeing someone get up on a stage with an acoustic guitar and it’s even worse if you play a ukulele like I do.

People have a preconception that you’re going to play trite plinky plonk tunes so it takes a little time for them to realize that you’re coming from a different tradition and you’re trying to do something more interesting. There are a lot of "avant folk" musicians in Ireland and I think they all struggle with the preconceptions of the alternative gig-going audience but I think things are starting to change.

What do you think could help spark a revival?
I think there’s a strong network of folk type musicians in Ireland but maybe more exposure to a wider range of gig goers could help. Dedicated folk nights around the country could be a way to introduce audiences to musicians they wouldn’t otherwise come across. I’ve been running one in Limerick since last year called Wireless Folk* and we’ve had some really great people play in the more intimate and appropriate venues for this music, like bookshops and galleries and we have one coming up soon in a church. I’m hoping these gigs will draw folkies out of the woodwork and hopefully turn other people on to new folk music. 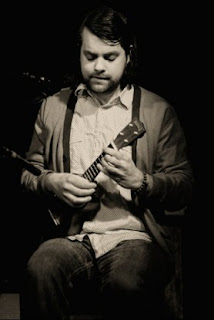 Sam Amidon played Cork and Dun Laoghaire recently and his knowledge of old folk songs and traditions are impeccable due largely to the fact that he constantly visits old libraries in search of new old music. In what ways, besides playing do you refine your knowledge of folk?
I’m always discovering amazing old music. The internet is obviously a great resource to come across people but I hear about a lot of music from friends too. I get to hear new music all the time when I stay with people when I’m touring and going through their records. There’s been some very important key figures and collectors in folk music and they’ve made it easier. So when you’ve been introduced to the work done by Alan Lomax, Harry Smith and Cecil Sharp it opens up a world of different paths you can explore. I think musicians like Sam Amidon and Alasdair Roberts are no strangers to sitting in on sessions and learning songs that way which is probably the most valuable resource to a folk musician.

Besides music, how else do you get the creative juices flowing?
I tip away at a few things at a time but usually some film work. I’ve done some music videos and I’m moving into more experimental stuff. At the moment I’m editing a short film that I made with a local crew and actors back in April and I’m hoping to get it into some festivals soon.

With so much going on, what do you do to discipline yourself to make sure certain arts are not neglected?
I’m not great at managing my time to be honest! I do tend to neglect some projects when I’m working on others, especially if they’re in different mediums. It’s like I’m using a completely different part of my brain when I’m working on music than when I’m doing film work. I tend to fall behind on projects and then stress out when a deadline comes up! The only thing I do to stop that happening is to write a list of everything I have to do and stick it up on the wall. It’s the best thing I can think of.

In what ways do other preoccupations help with honing your songwriting and playing?
I started doing some music for TV and film recently and that’s helped me look at songwriting in a completely different way. Just listening to music obviously helps too, if only to get into a songwriting frame of mind. Reading has also had an impact on my lyric writing or how I approach the language in a song. It happens a lot that the book I’m reading at a particular time will have an affect on the song I’m writing.


What does it mean to you to receive positive remarks from respected, experienced folks in the industry such as Donal Dineen?
It always feels great to get positive feedback from anyone and it’s very encouraging. With someone who is respected in the music world it’s exciting because it feels like something could come from it but I never know what to do with it. I feel like I should capitalize on it in some way but I don’t know how so it gets a bit frustrating then. I go from getting a buzz from good feedback to stressing out about it!

What can you tell me about your new record?
It’s a collection of songs that I’ve been writing and recording over the last few years. I recorded it at home and got a couple of extra instrumentation by friends who recorded at home too. It’s almost finished mastered and I’m in the process of looking for a good label that would like to put it out but it hasn’t been easy. It’s been a few years since my first release and I’d really like to get this one out soon.

If budget was limitless and time was endless, what kind of record would you like to make?
I don’t think a big budget would make a difference to the kind of album I’d like to make. I’d probably still do something outside the studio environment. Maybe find a good engineer that I trust and only one or two other musicians and record something in someone’s living room over a couple of weeks. I wouldn’t change the natural homely feel that I’ve gone for with my previous
recordings anyway.

As I am writing these questions before lunch I am compelled to ask...are you a sandwich fan?
Yes, I like a good sandwich, why not?

Construct your perfect sandwich for me.
Brown bread, Limerick ham, good cheese, basil and a little bit of chilli powder. Melt the cheese then toast the sandwich under the grill. I’m not a big fan of salad in a sandwich so I leave that on the side of the plate. That’s it, simple but good. 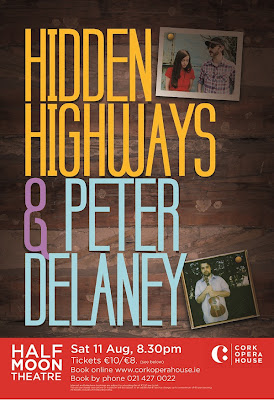