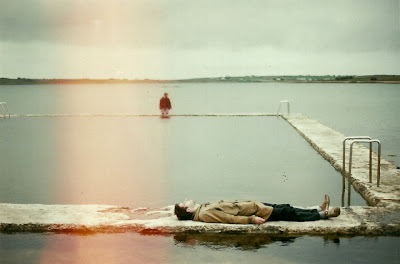 Mystery and intrigue ride shotgun with Galwegian trio Yawning Chasm on their highway to critical acclaim. Garnering respect from all angles online, the experimental folk collection - consisting of songwriter Aaron Coyne, guitarist Declan Kelly and newly acquired drummer Jimmy Monaghan - travel Cork-wards to release their latest EP. Declan explains the background of those responsible for causing quite a stir on the interweb.


"Aaron started writing and recording music in a solo context a few years ago. In late 2010 I started playing with him at live shows, at first on just a handful of songs until eventually we practiced enough of the songs to play full sets. Jimmy joined us only a couple of months ago on drums, he's done two gigs with us so far."

What is striking about Yawning Chasm is the fact that, despite still being relatively new to the earth in their current guise, the quantity of output has been nothing short of phenomenal; Three EPs and two albums all released in 2012, all made freely to download via bandcamp: how do they do it?

"We've released two EPs this year and we'll have two more out soon; one of them - 3 - we'll be launching at The Roundy. All of the songs on these will be mastered and recombined in a limited run double cassette box set, hopefully by October. The catalyst for these releases was in the abandoning of an album we had been working on throughout 2011. Long story short, we re-recorded everything and decided to release it all in installments in small runs of 30 CD-Rs. Aaron works in a shop and frequently suffers "stuff" fatigue and wouldn't want to be responsible for too much more of it.

"Aaron writes and records a song and gives it to me. The full song is recorded when it is ready and the time is right - under a full moon perhaps. With the recent addition of drums we may have to start recording live, which may or may not work, we'll just have to try it and see."

Inspired by the sounds of Sebadoh, Nick Drake and Red House Painters, Aaron, Declan and Jimmy are not afraid to incorporate other passions within Yawning Chasm. Aaron explains.

"All three of us dabble in photography and in the past we have used projections. They can help transform a room and it's nice sometimes to give an audience something else to look at besides us, as long as it's not too distracting and appropriate to the music."

Seen by some as quite experimental, Aaron and his wandering musical warlocks have welcomed the chance to play some unusual venues.

"We would regard our output as rather straight actually, expecially the new EP: 3. We know some genuinely 'experimental' musicians and feel that relative to them we actually sound quite straight-forward. We just try to play in venues we think are interesting. We've played a good variety of gigs recently; we did a tour in March that consisted entirely of gigs in shops, mostly unamplified. That was really interesting, and challenging. We've been doing more traditional PA'd gigs since then and they feel great too, in a very different way. We just want to play in the most comfortable venues we can, so that's what we try to do. We've done gigs in venues and in contexts that we haven't enjoyed, so now we just know to avoid those kind of shows." 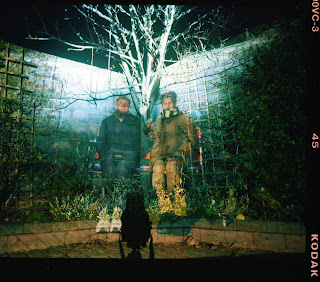 Live music to is all about community, especially these days. Does Aaron agree?

"Yes absolutely, especially in the way more unconventional venues are being used these days. Limerick for example has a really good attitude towards artists looking to utilise closed down shops as gallery spaces and music venues and these occupations seem to be in large part based on the idea that it benefits the local community."

"Brigid Power Ryce, Raising Holy Sparks (featuring both Declan and Aaron), Peter Delaney (read recent interview here), Gavin Prior and The Driftwood Manor would be people we've done loads with in recent years, and they're all amazing."

No strangers to Leeside, quite an impression was made on their last visit to Cork with local music-lovers buzzing about the then duo. The experience obviously struck a chord with Aaron too.

"We played at Black Sun in Plugd a few months ago and that was amazing. All Black Sun gigs are amazing but it felt really special to be involved in one. The audience was really really nice, appreciative and attentive and friendly. We were really struck by an enormous feeling of generosity, especially from [Black Sun's] Vicky Langan. Jimmy hadn't started playing with us at that stage and he's actually never even been to Cork, so this is going to be a treat for him."


For more on Yawning Chasm visit: