For Terror Pop/Agitate The Gravel, the end is nigh... 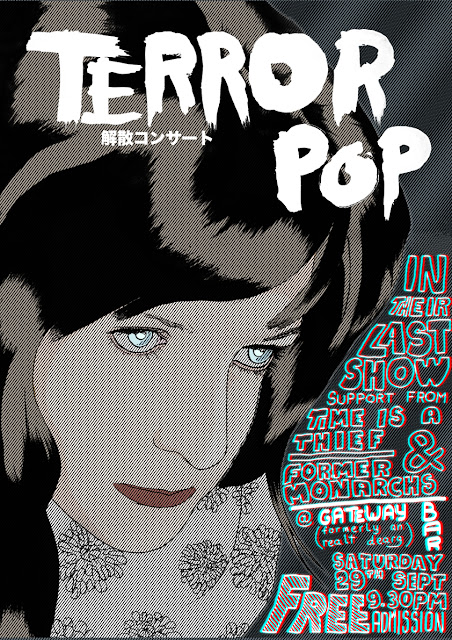 "...put it to each other if we were all happy doing what we were doing. There was a timid but resounding "no"."
The word is out, come September 30th one of Cork's greatest young musical hopes - Terror Pop (formerly Agitate The Gravel) - will be no more. Lead singer Chris Somers tells The G-Man...why?

The G-Man: So it it true Terror Pop are calling it a day?
Yes

How else do I put this...why?
In the words of Bluto of Animal House fame; "why not?" Sorry, watched that with Dan the other night and had to fit it in somewhere. It just seems like the right thing to do. We started this band with a little expectation but with no major experience in the area of playing original music or self promotion. Not to mention that we were never militant when it came to the style of music or genre that we played, as a result we spent a long time finding our feet. Between booking gigs and promoting we found that you have to be very genre-specific in order to get people to pay attention and that felt a bit limiting in a way (not that we intended on pioneering and redefining every genre like our Lord Beck).

In short, whatever notions or ideas we had for the music we wanted to make became very uncertain in the last few months and as a result we became unhappy making that music. Because you’re taught that the most commercial work you have is likely to be the most successful then you end up making choices based on a popular and false ideal that every bands should be as commercially successful as possible. We felt that our last release 'Wait' didn’t really reflect the next step we had wanted to take but seemed like the smart thing to do. *SLAMS TABLE* Ye can all wake up after all that waffling bollocks! So it was just music, nothing personal. Sorry it’s nothing juicy. Find Ruairi’s big who-dun-it reveal on page 25, gossip lovers!

It still must have been difficult to come to that. How long has the idea been rolling around?
About a month or so. We were in the middle of practicing the imaginatively titled 'Something' for a gig and put it to each other if we were all happy doing what we were doing. There was a timid but resounding "no".

What are you going to miss most about the band?
The notion of doing anything for the sake of it. For example the two drummer gig in the Crane with our pal Dan Walsh, writing and recording ‘b-sides’ because they’re ridiculous and fun. Playing loads of gigs! We were never interested in being weekend warriors and the call of road was all too alluring. I personally will miss hanging about with bands we played with regularly like Hope is Noise, Time is a Thief, Superblondes and many more. It can be crowded when you’re all on the same boat but you’re never short of company.

What three things do you think Terror Pop did that was a little different to all the other bands out there?
If you mean internationally, absolutely nothing. But if you mean locally I suppose we were among the handful in the last while that recorded and released their own stuff. We worked hard when it came to making physical releases because it’s a format we feel strongly about (especially Mr. Dale).

We wrote a Christmas song. And it was class. And I started a sentence with "and".


With the name change, festival dates etc. it looked like Terror Pop were gearing up to take on the world. Just how hard is it to make a go of being a successful original band?
It depends on what your expectation is. If you just want to play some gigs, record a few songs and have a laugh the world is your oyster. But if you’re really interested in playing with a view to one day doing it professionally it’s a totally different ball game.

We were lucky in that we were all in college for the duration of this band so there was no expectation to pack it in and get a job or anything like that. But there are bands in Cork and beyond who are working so hard to make ends meet as well as pay for rehearsal spaces, record music, make CDs and still find the time to be creative and enjoy it. It’s very easy to be the hamster chasing the pellet on the running wheel. You have these ‘lucrative’ opportunities presented to you via various media outlets and you can very easily and foolishly convince yourself that there are people who want to help you blindly. That’s not to say that you should be weary of those trying to help you but more often then not it’s just another load of bollocks in which you fill three lines of a blog or magazine or whatever. It’s made very difficult for bands outside of Dublin to receive any attention because of what I perceive to be a very close minded approach to anyone outside the pale.

Take for instance a very well known and celebrated festival taking place in Dublin in the next few weeks. Now bands had to pay a tenner to enter to be in with a chance to play at this festival for "IRELANDS best musicians and performers". When the lineup was announced a friend of mine put together a clash table to bands who had played the last 3 years running and the county in which these bands are based. Dublin has for the last 3 years had 10 times the number of successful applicants than any county beyond it. That’s no exaggeration. I think there are 3 or 5 bands that have never played a live gig who are on the bill but for some reason got through even though there is marking for all applicants live experience or last 3 shows. This kind of codswallop is the tip of the iceberg and a reality for any serious bands outside our fair capital city.

On a more positive note, what are your fondest memories of the Agitate The Gravel/Terror Pop years?
Going mad. I’ve found that there’s all kinds of tolerance for musicians who are up for going mad after, before or during gigs. I think it’s called artistic license?

What's the plan for September 29th?
We played a full on set with 2 great (and I mean great) Cork bands; Time is a Thief and Former Monarchs. We started off in the Gateway (bar on Barrack Street, Cork) when it was An Realt Dearg so we figured it’d be a good place to go out. There’ll be a hooley, of that there’s no doubt. Dan wanted commemorative lighters, but we may settle for pizza. We’ll be throwing in a few interesting covers and expect a finisher worthy of Mortal Kombat proportions.

What next for you four after that?
Whooops! That’s the end of Animal house!

So when and where will the reunion be held?
The afters of Dan’s third wedding. With commemorative lighters.


For more on Terror Pop visit: