"3..2..1..Welcome to End of the Road 2012!" Even the countdown to something as mundane as the opening of the campsite is treated with love and care by the organisers of End of the Road, still the most wondrous music festival this blogger has had the privilege to attend over the years. From legendary poet/author/rocker Patti Smith's "secret" woodland reading on the tiny piano stage to Alabama Shakes' Brittany Howard getting her groove on outside The Somerset Cider Bus amongst festival die-hards, End of the Road 2012 will again provide the perfect goodbye letter to an underwhelming Summer, serving up a platter of wonderful festival memories in the process.

As has become tradition, the Tipi's* Thursday night line-up is kept under lock and key until the moment festival-goers get their soon-to-be-grubby mits on the official programme, the most perfect souvenir containing profiles on all the acts involved including interviews, timetables, festival info. etc. The beautifully illustrated booklet of knowledge reveals the red ribbon privileges go to Torquay's Big Wave whose twee indie-pop energetically eases the early arrivals - with peg and pole duties now finally fulfilled -  into a more relaxed state of mind aided further by the first hot cups of hot cider from the nearby parked Somerset Cider Bus.

*The main stages do not open on Thursday

Due to a delay in the commencement of live proceedings, versatile cellist Abi Wade's set is cut a little short but this does not prevent the silver-clad, Brighton-based creator of And Blood And Air - her enthralling debut EP - living up to the EOTR programme's promise of "spellbinding".

Olympians, not the easiest band to research given the year that's in it, complete a trio of groups selected via the band application process with the Norwich newbies showing some promise with impressive guitar work and alternating rhythms and tempos. It is at this stage the realisation dawns that not much food has been consumed since setting out from Cork on Wednesday night so the Tipi is hungrily abandoned to explore the delights and treats of the foodstalls and boy is the standard set high at an early stage of the weekend; Ladies and gentlemen take note of Hedgerow, purveyors of the greatest waffle known to man, more specifically the PM Waffle. Spinach, feta cheese, pesto, angel wings, salad and angie's peas+ all topped off with a fried egg. Yes..a fried egg. Simply amazing stuff. So much so, that more than one onlooker comments on how great said waffle looks but also proceeds take a photograph. Oddly enough I am served a spoon to eat this godly bowl of decadence. Mmmmm...

+one of these may not actually have been an ingredient but it could have been... 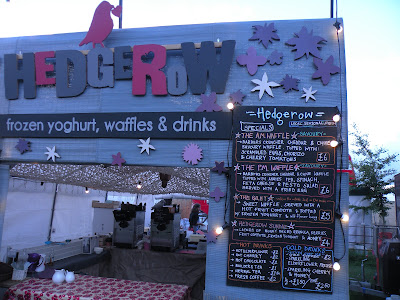 Waffle wanderings and Cider Bus dawdlings mean I miss multi-talented King Charles's performance but feedback is positive for the Londoner who has been making quite a name for himself whilst touring with contemporary folk overlords Mumford & Sons and Laura Marling.

The various taxi/bus/train/aeroplane excursions are beginning to take their toll and by the time the weary legs carry me back to the Tipi, a stripped-down Futureheads are singing sweet lullabies to a packed tent in the guise of their current Acoustic And A Cappella tour. Big names to send us out on a high including the clapalong hit single 'Hounds of Love' which can be viewed below courtesy Knappafire. To bed I go. After 361 days away, it feels good to be back - to be home - at End of the Road.

For more on End of the Road visit:

- End of the Road 2012 took place in Larmer Tree Gardens from 30th August to the 2nd September
- Early bird tickets for 2013 are now on sale
- Visit www.endoftheroadfestival.com for more details
- For more photos see EG Photography