Posted by The G-Man on September 07, 2012
"Billy Idol is my second cousin"
Following on from their festival frolics at the recent Stradbally session, The G-Man caught up with Anna McCarthy, fearless leader of indie-pop amigos Dott for a bit of a post-Picnic, pre-Pavilion chinwag concerning all things Dott.

Recommend clicking play on the player below for added Dott effect during the below interview.


The G-Man: So how was Electric Picnic?
Anna Dott: Electric Picnic was so much fun, the weather was amazing and we got to see so many good bands. It was Laura [Finnegan - bass] and Tony [Higgins - drums]’s first time at the Picnic and they loved it too.

When and where did Dott play? Good fun?
We played on Saturday at 6:30 on the Bamboo Stage and I have to say everything was so well organised and the guys working on our stage were true gents. We were a little bit nervous as it was out first time playing with our new member Miriam [Donohue] on guitar. She had previously been filling in on bass while Laura was away, but we liked her so much we decided to keep her! She played a stormer though and we all enjoyed playing the gig so much.

What does it mean to be asked to play such a large festival?
We were delighted to be asked! As soon as we formed in January, I can remember Laura saying "I hope we play the Picnic this year" so we were really excited when we got the news. I just hope they’ll have us back again next year!

What are your top three memories from Electric Picnic 2012?
1. All of Dott going on the shittiest Ghost Train ever. Basically there’s a guy paid to feel you up in the dark, squirt water in your hair and then the ride is over. Typical festival behaviour.

2. Tieranniesaur playing the Salty Dog stage in the forest at 3:30am, just so so much fun! (However some band members did not make it this far into the night!)

3. At the time it seemed like the worst moment but looking back now it was pretty hilarious. Sunday morning 7am Laura, Miriam and I in our tent listening to the most ridiculous girl have a one way conversation with her friends about her musical knowledge. She thought Sigur Ros
were Islamic.


What can you remember from your last gig in Cork?
Free bottles of beer. Crazy woman shouting at me in Indian Moon (local Indian restaurant). Hanging out with my favourite Cork band Hope Is Noise.

It was a bit more hardcore than the music Dott are known for. How do you feel your music held up alongside the louder likes of Hope Is Noise, Stanton's Grave etc?
Agitate the Gravel (now Terror Pop) also played that night so I think there was a healthy balance of heavy and poppy. But I find that a lot of Cork people I know listen to both the heaviest and the poppiest music, so I think our set just about held up because the crowd had a broad taste in music. But maybe they were just being polite too.

In what way have Dott grown since Fred's that may be noticeable on Saturday night?
I think that was only our third or fourth gig and we’ve played non-stop since then, so I think we’re a lot more seasoned now. That night was also a different line up compared to now. Laura’s brother Donal was filling in while Tony was in London on that night and Nicola (from Sludge/Doom band Rites) was still playing with us then too. We also have lots of new songs that we’ll be playing on Saturday. We’ve grown a lot I guess, but I still think we have lots of growing to do! 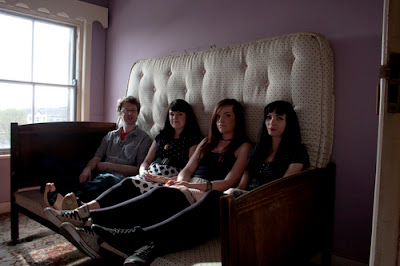 Aisling in the Pavilion is doing some stellar work with Irish bands. How important do you feel it is to have such enthusiastic and downright decent promoters working with original Irish bands these days?
It’s really important. Aisling is such a lovely person and she does fantastic work. She’s been on the ball and in regular contact since we confirmed the gig months back. There’s nothing worse than playing a gig for a promoter who hasn’t put any work in, it’s actually really stressful for the band. We’ve only had one or two bad experiences so far and it’s really disheartening, but then a good gig comes and makes it all OK again! And by the way Aisling text yesterday to say she’s making us pizza for when we arrive! Where else would you get it?!

How was your recent trip to the States?
So much fun! We only did one show when we were all in NY and available on the same night, but it was so lovely. We played the Cake Shop in the Lower East Village with a couple other bands and got a really nice crowd and reaction. We had a small write up on Brooklyn Vegan and Torche plugged our show on their facebook, both of those were huge for me! We’ve had some lovely emails from new friends after that so we’re really hoping to get back to do a lot more shows in the US next year once the album is in the bag.

What lies ahead for Dott in 2012?
The last few months have been crazy, it’s been gig after gig after gig, so hopefully I’ll get a chance to focus on songwriting over the next couple months and then record the album! We’re hoping to have it out for summer 2013, but nothing has been set in stone about studio or release dates just yet. We have a few more gigs coming up including HWCH but I’m really hoping to put the head down soon record lots of new demos.

Tell us one thing about yourself that would surprise us?
Ummm most people think I’m from Galway ‘cos I’ve lived there so long now but I’m actually from Schull in County Cork. Ok that’s not very interesting… ummm. My mother has always told me that Billy Idol is my second cousin but I think it might just be a really long, well-played, elaborate joke at my expense.