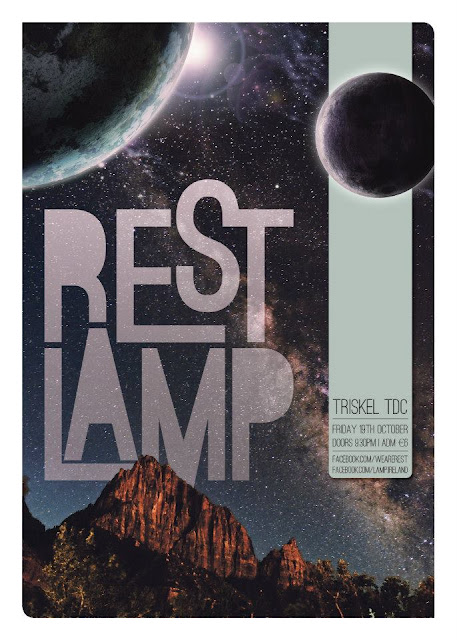 Rest triumphantly return to the live stage following the ill-fated escapade in the old Fas buildings back in February.
On that fateful night at the turn of the year, the protectors of peace and justice pulled the plug on what was turning out to be a bit of a legendary night. Taking place in the Triskel Arts Centre's TDC auditorium, Lamp support complete with a whole new shiny box of tricks in the form of recently released EP Trials of Trails.

For those more into their folk and Americana, that very same night also sees the return of John Blek & The Rats following a successful Summer which saw the loudest folkies on the planet make a whole bundle of new friends with stints at pretty much every festival up and down the country. Cyprus Avenue on Caroline Street is the destination for what is sure to be one hell of a hoe-down.

Friday is certainly the night to sample local wares as the Half Moon Theatre plays host to a night of twiddles and beeps with the excellent Carried By Waves playing his first Cork show since his recent stint at Hard Working Class Heroes.

Other gigs of note this week include indie Brooklynites The Shondes in the The Crane Lane (Wed - 17th), Wallis Bird with support from Kildare-born multi-instrumentalist and songwriter Inni K (who recently opened for Efterklang) in the Half Moon Theatre (Thu - 18th), hardcore heads Every Time I Die in Cyprus Avenue (Sat - 20th) and, as featured last week, the enigmatic Myles Manley & The Little People and Trumpets of Jericho who close out the week with a double date in Fred Zeppelins.


Friday, 19th October
- Living With Lions, Marathonman and Boy Vs Romeo in The Gateway/An Realt Dearg
- John Blek & The Rats in Cyprus Avenue


- Sebek and Black River Affair in Fred Zeppelins
- Carried By Waves, We Arrive Alive and Horsemen Pass By in Half Moon Theatre


- Extravadansa in The Crane Lane Theatre (11.30pm)
- Every Time I Die in Cyprus Avenue
- The Calvinists in Pine Lodge (Myrtleville)


Sunday, 21st October
- The Selections in The Crane Lane Theatre (11.30pm)
- Myles Manley & The Little People and Trumpets of Jericho in Fred Zeppelins
- Babba Yarru with Andy Wilson in The Roundy