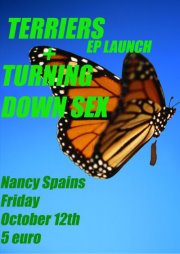 Earth's Dylan Carlson returns to Cyprus Avenue for a solo performance which is sure to cover a vast back catalogue of terra firma-tormenting splendour. That's Tuesday night on Caroline Street and one not to be missed.

Eternal Japanese crusaders Shonen Knife hit the Crane Lane for an early punk show on on Friday on the same night local lotharios Terriers officially introduce the world to debut EP Girl, I'm Gon' Do Right By You in Nancy Spains on Barrack Street.

For those chomping at the bit for something darker then look no further than Fred's on Parliament Street which houses U.K. dukes of doom Conan and fellow metal merchants Rites who travel down from Galway on Wednesday night.

For something completely different to all the aforementioned then look no further than break-beat legend Afrika Bambaataa who makes a late appearance in The Pavilion on Carey's Lane on Saturday night.

Thursday, 11th October
- Jericho in The Pavilion
- An Evening with Honest Spud Leonard in The Roundy


Sunday, 14th October
- Lower Than Atlantic and Time Is a Thief in Cyprus Avenue (2pm)
- The Grunts in The Bowery
- Dylan Tighe in Half Moon Theatre
- John Blek & The Rats in Pine Lodge (Myrtleville) (5pm)