Posted by The G-Man on October 02, 2012
What was Simon Raymonde thinking? I assume the Bella Union chief's opening night curator status was meant to lighten the load on the End of the Road organisers, not make their lives more difficult.
Yet that is precisely the problem served up by the feast of Friday night memories shared by the thousands of wellie-warriors in attendance for the previous day's festivities. How could Saturday's shenanigans possibly top Friday's frolics?

The Deep Dark Woods, this year's Saskatoon representatives (fellow Canadians Slow Down, Molasses were downright deadly in 2011), are charged with opening Woods Stage-duties. Somehow, perennially spectacled frontman Ryan Boldt effortlessly remains the coolest man in the field, no mean feat beneath the baking ball of fire that is the Saturday sun. The humid swampy conditions suit the quintet's broody alt-country which blossoms in the heat. Day three is off to a flyer.

As the Canadians exit stage-left, another reminder of why End of the Road is a little different to other festivals eases out of the PA in the shape of Caitlin Rose's 'Learning to Ride', proof past performers are never forgotten once entwined in Sophia and Simon's wonderfully-spun musical web.

More alt-country (with the touches of rock replaced with boisterious blues) arrives on the same stage in the handsome shape of William Elliott Whitmore. The epitome of the term "rugged charmer", the tattooed rogue is as at ease entertaining the crowd with tales of back home in Iowa as he is beating out his one-man band ballads. The banjo-driven finger-to-the-man compositions 'Bury Your Burdens In The Ground', 'Lift My Jug to the Sky' and 'One Man's Shame' are just a portion of the highlights from the likeable "rain-dancer"'s set.

In shadier climes, Irish duo The Lost Brothers are taking to the Tipi's stage. Magic moments are regularly moulded in this tent and the following set is fresh out of the oven. Sharply dressed in 30's garb, the mixture of tunes from a better time transports the listener back a number of decades. Combining compositions such as the gorgeous gospel gem 'Now That The Night Has Come' from new record Passing of the Night with more recognisable oldies 'Angry at the Sun' and 'Goodbye Kid', all delivered with the most tender of tones. There's even a couple of surprises thrown into the mix with The Big O's 'Hey Miss Fannie' and Ricky Nelson's 'Lonesome Town' (the latter discovered on Songs the Cramps Taught Us despite being better known for its appearance on the Pulp Fiction soundtrack).

The Big Top is playing host to a different sound altogether with 2:54 firmly planted in the current and facing the future squarely in the mush. Throbbing synth-esque bass on top of Colette and Hannah Thurlow's machine-like guitars motor the quartet through an engaging set.

The first jaunt of the day to the Garden Stage is to peer inside the colourful and always entertaining (and educational) mind of Jeffrey Lewis who is cursing "the most perfect festival weather". Why? "Terrified of the mud", he and his Junkyard bandmates "wussed out" needlessly forking out £30 for wellies in Hull. You win some you lose some I suppose Jeffrey. Homicidal confessions in the rapped rage of 'Mosquito Mass Murderist' slightly edge out an extract from the "Sonnet Youth Project", Lewis' poetic ode to Thurston Moore, Kim Gordon and co.'s past endeavours. Back to the Woods Stage for something very special indeed...

Opening with slow-burner 'Rise to the Sun', it takes all of a minute for Alabama Shakes to light the rock 'n' roll fuse on a crowd that have grown a little sleepy amidst the welcome Indian Summer heat. The Creedence-esque intro riff to 'Hang Loose' sends the thousands over the edge as Brittany Howard begins to stretch that golden voice that could sail a thousand ships in itself. A lot of hype and hooplah has surrounded the southern American's debut record but it was difficult to ignore the feeling that Howard has the potential to ride the rails to legendary status. The rolling, tumbling freight train that is single 'Hold On' is greeted with what counts as hysteria for an End of the Road crowd. Closer 'Make Me Feel So Good' affords Howard the chance to lay down her guitar and relinquish herself to the role of the greatest rock frontwoman on the planet. An incredible set from the Athens, Alabamians.


A touch of Tindersticks's on the Garden Stage is good but feels nothing less than a comedown after what was witnessed previously so food is consumed before the weary legs wander over to catch New York's Grizzly Bear play only their fourth live gig in two years. The set is mostly made up of songs selected from the at-the-time unreleased Shields, beginning with 'Speak in Rounds' which flourishes under the illuminating light show in a fountain of phase and flange. Although the new material soars the winner on the night comes in the uncharacteristically catchy 'Two Weeks', one of the numerous highlights of the weekend so far.

Bella Union raised the bar to a lofty height the previous night but the Saturday session pushes Simon R and co. close. Not quite as good but close. Sunday is something else entirely...

For those who missed Thursday's review click here and here for Friday. 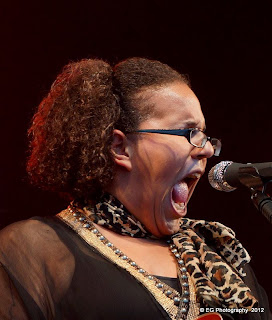 For more on End of the Road visit: