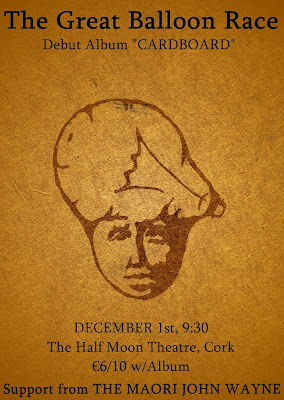 By this time next week it will be December and everyone will be heavily-engrossed in fine-tuning our Santa lists ahead of the big man's even bigger day. For those one step ahead of the game with nativity calendars already purchased, open that little paper door for December 1st and find the innocent little red-cheeked faces of Cork's favourite jazz-prog pioneers The Great Balloon Race, who launch their debut album Cardboard on that same day. Again the Half Moon is the place to be for this eagerly anticipated album cork-popper, with tickets priced at €6 (or €10 with a copy of the album itself).

Elsewhere, Irish chanteuse Julie Feeney will be bopping about Ballincollig on Monday so don't get a fright if you see the celebrated composer and singer stuffing her face with Lennox's. Legendary Cork venue The Lobby continues to live on in the form of new guise L'Attitude 51 which welcomes Virgina-born songwriter Rachel Austin upstairs for a cosy, intimate affair on a quiet Tuesday night before making her way down to Clon on the following night for a date in De Barra's.

The suddenly very active UCC Live Music Society hit Cyprus Avenue again with a heck of a local trio involved on the bill. Lamp, When Good Pets Go Bad and Fear Stalks The Land will all play sets on Caroline Street on Wednesday night for the paltry price of a pint (€5).

Inflame the Friday night fires with Barcelona misfits Peligro who are charged with priming the punk pylons in Fred's on Friday night before all roads point to the Half Moon on Saturday.

And last but not least, it's a sad goodbye to West Cork Ukulele Orchestra who call it a day after two years of fun-filled sets up and down the country. This one's taking place in the Cork Opera House and is set to feature all sorts of guests including a couple of Fredos.

FREE GIG OF THE WEEK
Glitterface and Mirrorman combine their forces to become alien pop duo Nanu Nanu who open up live musical proceedings for the week with a late one in The Crane Lane on Phoenix Street, waving goodbye to November 2012 with a swish and a sway of their electronic horsetail.


Coming in December
4th - The Unthanks in Cork Opera House
5th - Mono in Cyprus Avenue
5th - The Gloaming in Triskel Arts Centre's Christchurch
6th - Richard Hawley in The Savoy
13th - The Man Whom and Anna Mitchell in Coughlan's
15th - Native, Terriers and We Come In Pieces in Fred Zeppelins
16th - Lower Dens in Half Moon Theatre
22nd - The Altered Hours and Trumpets of Jericho in The Pavilion
26th - John Blek & The Rats in Cyprus Avenue
29th - The Frank & Walters play Trains, Boats and Planes (20th Anniversary) in The Savoy
31st - Mick Flannery in Cork Opera House