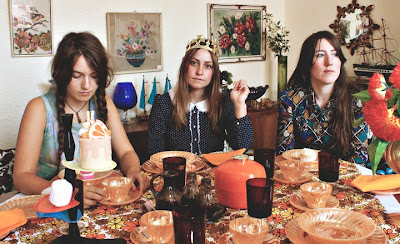 The G-Man's favourite freaky folkies Stealing Sheep are back with a brand new video for 'Rearrange', the new single from debut record Into The Diamond Sun.

Liverpudlians Becky, Emily and Lucy - who, as it happens, opened up the latest edition of AYCD: click here to listen - are set for their first Irish visit in the new year with The Academy 2 a surprise choice of venue (simply as it is so bloody small) for the threesome. Don't be surprised if ticket sales amp up a notch over Christmas as Into The Diamond Sun starts to pop up on various "Best of 2012..." lists so here's a chance to get in there quick. No other Irish dates unfortunately. For a bit of official press release copy-and-paste action see below quotes from the band.

"We filmed throughout the night in harsh conditions, jumping on a giant trampoline, running in the dark, and animating the diamond eater on a giant crane with an industrial fan blowing in our faces. We used a cast of our friends who were not only happy to contribute to the choreography but also happy to spend hours in a freezing warehouse to get the perfect shot! We worked with local film maker Jack Whiteley, who worked with us on conceptualizing the storyline and co-directed and edited the video. Diamonds, smoke, fire, monsters, and hypnotism join us on our journey into the diamond sun...”

For more on Stealing Sheep visit: