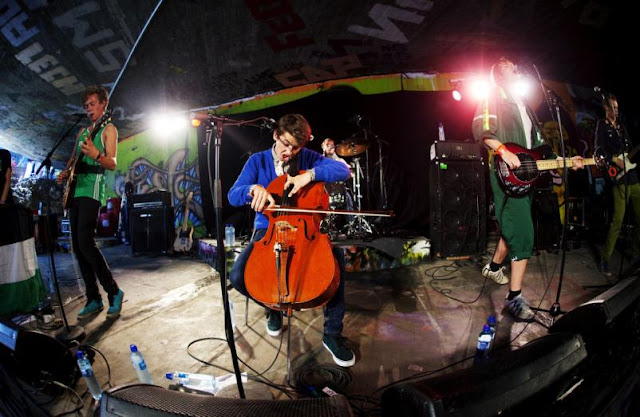 "If nobody else is going to save the world, then you better start doing it yourself."
Norwegian noise-punks Honningbarna unleash their wave of cello-led metal on the unsuspecting carousers in Carey's Lane this Saturday. Before their debut date in The Pavilion - following hot on the tail of gigs in Dublin (Whelan's, 14th) and Galway (Roisin Dubh, 15th) -, eternally well-dressed front-man Edvard Valberg chatted with The G-Man about punk, presidents and local sodas

The G-Man: What does “punk” mean to you?
Edvard: Fun. Desperado attitude, but intelligent, because if nobody else is going to save the world, then you better start doing it yourself.
Politics drive many of your lyrics. What interest have you in the upcoming U.S. presidential election?

It was interesting to see if the majority of the American population were full-on idiots...or semi. The pop-culture icon Obama is obviously the better one, but I can't really see why he's portrayed as this saint. Fighting wars in more areas than Bush, patriot act 1 & 2 is still in full swing, ACTA is signed and Cuba still has it's trade boycott. It's all good that homosexuals now can marry in the US, but that doesn't quite cut it in 2012.

Although America is no longer as powerful as it once was, how do you feel the outcome will affect the rest of the world?
Even though USA have been serious douchebags over the years, there are quite a few of the challengers that's better. Russia? China? In the future, we in the western world will have to lower our living standard either way. Either worse living standards for a few, or how it tend to work - a bit worse for a handful, and a hell of a lot worse for the most.


Ireland’s history is soaked in thousands of years of bloodshed and violence, relatively we have only found peace in recent years. A theory has been put forward that because of this new found calm the Irish people have grown apathetic or even simply submissive to our governments and banks. What do you make of this?
As I have never lived here, I've just read about it, and the Irish people has always struck me as a wild people with a healthy problem with authorities. And the last time we where in Ireland it sort of seemed right. The way people talked, their attitude, they way they dressed, it all seemed right.

What’s planned for the upcoming Irish gigs to shake us out of our slumber?
Yelling, dancing and big riffs. Fast.

When it comes down to it, regarding politics anyway, most musicians do not have much to say these days. How important do you think it is that bands/singers etc. speak out in song about our current state of affairs?
We think it is very important, as it is important for anyone to speak up. But all people are different in some ways and need to find their own arenas to make the world a slightly better place to be for others. We do it by the politics in music, some by very different things.

But, we think that people once again are thirsting for lyrics that isn't just about parties, bitches, money, lost love or how fabulous it is to fall in it. People want to yell, they want to mean something about how things are done, but have fun with it. The '90s and '00s are full of ironic distance and individualism that is meant to keep things like what we do to function. And it's nice to see that this is changing.

Your high energy and great showmanship has been winning you so many friends on the live scene. What bands have made an impression on you in a live setting?
Talking Heads, Gallows, Velvet Underground, Dead Kennedys, Turbonegro, Minor Threat and lots of others. Even though some are more up in your face all of those bands are real. Even though they are quite extreme in their own ways, there is no gimmick.

After making such an impression at Eurosonic which meant higher profile gigs all over Europe (including Whelan’s), what does it mean to you to be returning to Ireland for the third time this year?
We actually just talked about it. Whelan's has become quite the stronghold for Honningbarna in Ireland. Every time we've been in Ireland it has felt constructive. It's a gross cliché, but we really like it here. People [have] got a healthy dose of "fuck off".

This time you return for a four date tour of Ireland. Combined with nearly a dozen UK gigs that’s quite a big tour. Does this mean you are moving Honningbarna up a level?
It feels like a natural step on our way to WORLD DOMINATION.

Because of this, has anything changed as regards your preparation for the tour?
I recently broke my cello so it was quite a hassle getting a new one. We have also stocked up on equipment because it really is just a matter of time before things start to brake down. The interesting part of it is if it becomes us or the equipment. Social experimenting up in this.

A friend of mine takes photos of phone booths when visiting different cities. Do any of Honningbarna have any traditions that they uphold on visiting each new city/country?
We don't drink so we have developed quite the interest in local sodas. Because of the time schedule it has become our take on culture.

Was such a speedy progression ever imagined? What was the original plan for the band when it was first formed?
The original plan for Honningbarna was to save the world and have fun while doing it, and it still is. We are just doing a bit better than we thought we would. 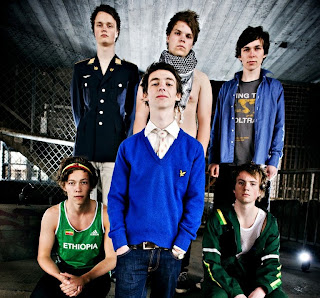 For those still new to you guys, how did Honningbarna actually form in the first place?
We met at school when we were seventeen and did what all seventeen guys interested in music would. Start a band, play loud, play fast and dance.

In the past, Edvard has stated “We don’t own our music” which is incredibly admirable in this capitalist day and age. Another perspective proffered these days is that, due to free downloading the concept of the album and recorded music in general has become worthless and throwaway with listeners able to download tracks by the thousand without a second’s thought. What do you make of this theory?
What music is worth can't be determined by how much it sells. Music has never been a bigger part of people's lives now that it is being spread in such a large scale. We don't care so much for recorded music, we think that where music belongs is in interaction with each other. From stage to audience communication, through dancing with strangers and yelling. That's where you understand how powerful we are together and that we can do whatever we want.

So it's absolutely vital that you tour as much as you possibly can?
Absolutely.

EMI being one of the biggest record companies in the world, how was the decision made to sign to EMI Norway?
We talked with a lot of labels, both indie and major, and we found out that the team that seemed most keen on working with us was them. And we got the best deal from them.

How was this news received by your die-hard fans?
You assume that it didn't go down well, but we have just gotten good feedback on this actually. We talked a lot about it, and it seemed like the right thing to do.

What opportunities will this deal open up to you as a recording band?
We are recording a new album in December actually and releasing it in March. Haven't done it before, but we look forward to recording. We've got Pelle Gunnerfeldt (Hives, Refused, Ghost of a Thousand) to produce it so that will be sweet.

What fact about Honningbarna can you tell us that would surprise us?
That Fredrik [Justnes - guitarist] was the world champion of trial unicycling.


For more on Honningbarna visit:


Official Website -- Facebook -- Twitter -- Soundcloud
- Honningbarna play The Pavilion, Cork on Saturday, 17th November
- Girl Band support on the night
- Tickets are priced €6 (before 9.30pm, €8 after) and can be purchased from the venue itself, located down Carey's Lane, Cork