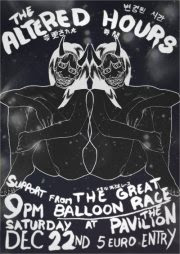 Deck the halls with pedalboards and marshall stacks as the last full gigging week of the before Christmas is upon us...

...and it's off to Carey's Lane we go for a gig of the week high in local psych-protein. Following the recent announcement that The Altered Hours have pretty much wrapped up a début album which should be set to go in March 2013, the mesmerising, sixties psychedelia-meets-21st century rock ravens perch upon the stage of The Pavilion on Saturday night. With the enthralling The Great Balloon Race on crowd-cockle-warming duty and tickets priced at a paltry €5, Saturday should be one heck of a way to celebrate the commencement of the Christmas hols.

One of the last international acts to visit Leeside in 2012, Grant Hart concludes his double-date tour of Cork with a date in Cyprus Avenue on Monday whilst northern Irish honky-tonker Duke Special visits Cork Opera House.

It's a Joni Mitchell night in Bradley's of Barrack Street on Wednesday while those still-to-be-house-trained When Good Pets Go Bad bring the bop to An Bróg.

Chrimbo songs in Christchurch Thursday but if that's a bit festive for you why not pop your head into The Pav for black-metal maestro turned eleco-ninja Wife who brings special guest Toby Kaar along for a sizzling night of electronica in the downstairs bar.

It's all nineties nostalgia in The Savoy on Friday as Dublin rockers The Stunning revisit first record Paradise in the Picturehouse. Going back even further, visit The Quarter for a screening of one of the greatest live music movies ever made Talking Heads's Stop Making Sense. This one's one of those all-too-rare BYOB events so make sure to grab a bottle of vin rouge before you arrive at Camden Quay.

For those more into their folk get thee to Douglas Street as John O'Connor/Blek leaves his rats at home for the night to play an intimate show with Anna Mitchell in Coughlan's before the week is wrapped up by The Hard Ground (again in Coughlan's) and Kormac's Big Band in The Pavilion, both on Sunday night.

FREE GIG OF THE WEEK
Hope Is Noise and Terriers don the santa hats for a rock and roll extravaganza on Parliament Street.


Friday, 21st December
- Blood or Whiskey and Audible Joes in Fred Zeppelins
- FILM: Screening of Stop Making Sense in The Quarter(7.30pm BYOB)
- The Stunning perform Paradise in the Picturehouse in The Savoy
- TDC Xmas Party with DJs, Ringo and more in Triskel TDC