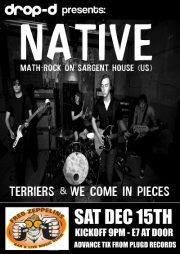 'Tis getting cold but the gigs continue to be mighty warm...

The last KC Session of the calendar year kicks off in a couple of hours over in The Crane Lane while it's the first of two movie nights on Caroline Street as soundscape knights Sigur Ros' Valtari film experiment receives the first of two Cork screenings in Cyprus Avenue on Monday (and again on Thursday).

It's back to the same venue on Tuesday as Cyprus Avenue welcome their second Japanese visitors in the space of a week with experimental rockers Boris teaming up with former Hooray For Humans bassist Matt Hedigan's No Spill Blood for a loud one on Caroline Street. For something a little different on Tuesday evening why not pop a head into The Quarter for an experiment in collaborative storytelling brought to you by those sickeningly talented Pretty Handsome Studio folk. For more details on how your illustrative or storyteller attributes can be put to good use see the official facebook event here.

Bradley's of Barrack Street's regular Wednesday night session welcomes The Pearls, a local folk group who have been creating a little bit of stir with recent gigs. I am yet to catch them live and they have nothing online but could be worth the stroll up Barrack Street before northern rockers Gascan Ruckus close the night with a late one on Phoenix Street.

The Man Whom makes his maiden bow in Coughlan's with local songwriter Anna Mitchell charged with heating duties for the folk-lovin' crowd on Douglas Street on Thursday.

Besides Lower Dens on Sunday, the weekend's big hitter comes in the triple threat of U.S. label Sargent House's post-hardcore quartet Native, Cork rockers Terriers and Limerick natives We Come In Pieces taking to Fred's on Saturday for a memorable pre-Christmas shindig.

For those happy to travel then fill the tank up and head for Clon as former Husker Du songwriter and drummer Grant Hart plays the first of a couple of southern dates with a date in De Barra's on Sunday evening.

FREE GIG OF THE WEEK
It's not the full band but David Nelligan & Andy Wilson play an intimate, stripped down show in Bru on MacCurtain Street Wednesday night.

Wednesday, 12th December
- The Pearls in Bradley's of Barrack Street
- David Nelligan & Andy Wilson in Bru
- Gascan Ruckus in Crane Lane
- Corkapalooza featuring The Reverse, Chinese Elevator Music, Annie Sutton and The Pearls in The Pavilion
- The Empty Orchestra in The Roundy