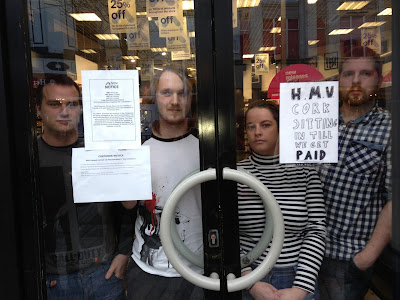 
For all following the latest with HMV (see here and here for a recap), members of the Cork store phoned to let me know this is where they currently stand:


What exasperates the situation is the fact that the HMV head office seems to be acting as if HMV Ireland does not exist. The staff have had no contact about pay or what is happening while HMV U.K. continues to trade, albeit in administration. Staff from HMV stores in both Limerick and Cork are now bedding-in until answers are provided.

It's disgraceful the lengths the ordinary worker has to go to merely to receive what they are entitled to. If ever the Irish government had a chance to reclaim some good will from the people of Ireland, this is it. Over to you Enda...