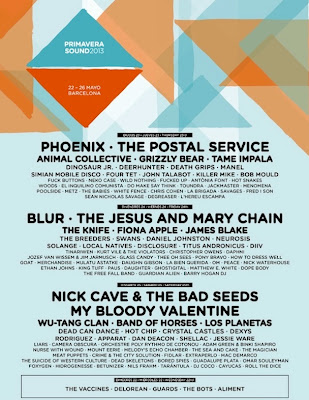 With Damon Albarn's Blur already confirmed, today was the day that one of Europe's top festivals announced the bones and guts of their early Summer festival and boy did the organisers of the Barcelona leg of Primavera not disappoint. Nick Cave & The Bad Seeds, Animal Collective, The Knife, Phoenix and more were all listed as the big names to descend on Parc del Fòrum. With Damon Albarn's Blur already announced the real heavyweight name dropped earlier today was the word that the newly reformed The Postal Service - in celebration of seminal record Give Up's 10th anniversary - would headline.

The full line-up to date seems to be:

Here's a Spotify list that will grow and grow as I add to it in the coming days.


For more on Primavera visit: