Posted by The G-Man on February 25, 2013
So apparently Monday is the new Saturday...


Get the glad-rags outta' the dryer quick as the weekend is here already, gig-wise at least. Legendary - and I mean legendary - country singer John Prine visits the Opera House this evening for a sell-out show on Emmett Place. Beloved by Bob Dylan, Johnny Cash and Roger Waters, the American songwriter was inducted into the Nashville Songwriter's Hall of Fame in 2003 and continues to release records with 2011's Singing Mailman Delivers double disc dipping way back into his past. Night owls may rove across town to catch Maryland quartet Arbouretum's late show in The Crane Lane Theatre (11.30pm) to wrap up one of the best gig nights of 2013. I repeat: on a Monday!

Head to Gulpd Café on Wednesday for something different as performance poet and former playwright Wasps Vs Humans presents his one man show: 'Influence/Me'. There are not many better locations for an intimate show than Plugd Records' café so get there early if you fancy a seat to accompany your chocolate Beamish cake. New blood is on show for those looking to see the noisemakers of tomorrow as first The Pavilion play host to the second Colaiste Stiofain Naofa Live & Gigging night this month (Wednesday) whilst the same night sees the wildcard heat of UCC Live Music Society's annual battle of the bands competition descend upon Cyprus Avenue. It's all about folk on the Friday night in Coughlan's as Belfast-based songsmith Chris Campbell takes to the cosiest of rooms on Douglas Street. 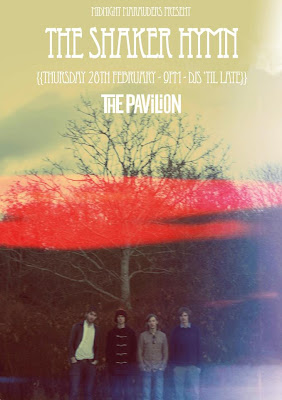 FREE GIG OF THE WEEK:
Thursday: It's seriously tough to beat Carey's Lane for free gigs these days. Next up for their series of downstairs bar shows sees the revamped and reinvigorated Circus Cat - now going under the guise of The Shaker Hymn - in The Pavilion.