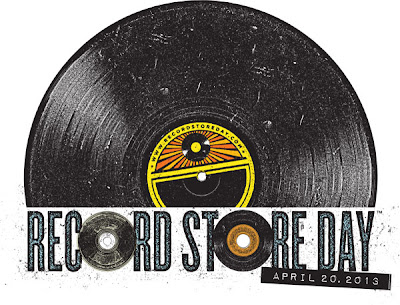 The international celebration of the magical institutions that are our local independent record stores returns for its sixth outing on April 20th and again this blog is going to go a bit RSD-crazy with local, national and international bands, fans and stores all contributing pieces regarding their opinions on and their excitement shared of the big day. Last year's week-long special included interviews with Slow Down, Molasses, The Jimmy Cake, Le Galaxie and more and quite a day was had in Cork's (thankfully) reopened and reinvigorated Plugd Records as lots of records were bought, discs were spun and laughs were had before the night-time celebrations continued downstairs for a storming live show curated by the store itself.

Starting on Monday 15th April, we get to do it all again so stay tuned for more. For now, check out all the Record Store Day 2012-related posts using this shiny link here. More importantly, for a rundown of what's hitting the shelves - if they even make it that far - see this handy pdf file here.