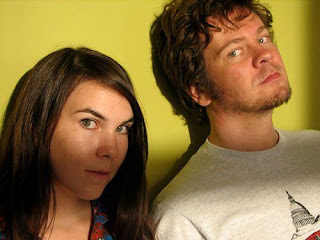 There's no time to catch a breathe following the hectic record store day hijinx with the arrival of first A Hawk & A Hacksaw and then K-X-P upon Leeside. It's the former who step out first with a midweek show scheduled for the Half Moon Theatre for the Albuquerque duo of Jeremy Barnes (who previously fulfilled drumming duties with Jeff Mangum's cult indie heroes Neutral Milk Hotel) and partner in crime Heather Trost on Wednesday night. For those who enjoy their Eastern European instrumental gypsy folk, this one's for you.

The launch of the 2013 edition of Southern Gothic is where it's at on Friday as the colossal K-X-P more slice and shred the red ribbon than cut at an early festival opener in The Crane Lane Theatre on Friday evening. They like to call themselves electro-pop. Electronically-charged spiritual space-rock would be another suitable tag. I missed the mysterious threesome's appearance at last year's session due to family gathering. The cousins can enjoy the extra piece of cake this year as I shall not be missing K-X-P again.

The Cork leg of Thinguma*jigSaw's last ever Irish tour heads to Plugd on Saturday night. Read all about it here.


Other highlights from the week ahead:

FREE GIG OF THE WEEK:
Friday: Did I mention the K-X-P show on Friday is FREE? To The Crane Lane Theatre with thee.

Friday, 26th April
- Karrie O'Sullivan and Peter Njihia in Bradley's of Barrack Street
- Southern Gothic launch with K-X-P in The Crane Lane Theatre (8.30pm)
- Fingersmith in Cyprus Avenue
- Baby Godzilla, Stop All The Clocks, When Good Pets Go Bad and This Place is Death in Fred Zeppelins
- Later With: The Grunts in The Roundy
- Moo in De Barra's (Clonakilty)