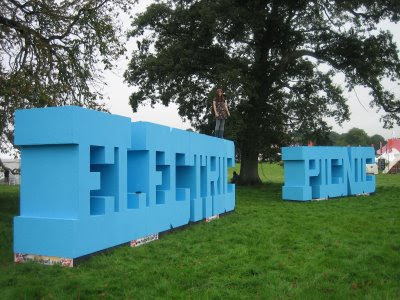 Ahead of this afternoon's announcement I make a point of the pointless...

It's nearly May and there is still no announcement from the organisers of Electric Picnic, until later this afternoon of course. With Longitude (Kraftwerk, Phoenix, Foals, Vampire Weekend), Forbidden Fruit (Chic, Four Tet, James Blake, Austra, Daughter), Iveagh Gardens (Tallest Man On Earth, Grizzly Bear, Beach House) and even the Laois long weekend's very own spin-off festival Body & Soul (Nick Cave, PiL, Kurt Vile, Solange, Willy Mason) pinching EP-friendly indie acts from beneath their very noses - holy crap even perennial picnicers Hot Chip are playing elsewhere this Summer - the organisers are really going to have to serve up something special when the first names are flaunted later today.

The names of Arctic Monkeys, Bjork and Nine Inch Nails are being thrown around as possible headliners so, if everyone else is diving headfirst from the speculation bridge of doom, I thought I would throw my hat in the ring with a couple of predictions.

Belle & Sebastian
One of my favourite ever Picnic memories has to be Stuart Murdoch and co. feverishly delivering live versions of 2006's The Life Pursuit to a packed tent. Seeing as they are touring again this Summer it's my bet they'll be back

David Byrne & St. Vincent
The most practical and financially viable way to get some Talking Heads tunes blaring from the main EP stage would be to get the Love This Giant tour to etch Stradbally into their touring plans.

The Wu Tang Clan
They're knocking about this part of the world about then so what the hell, they're my "hip hop" tip.

Caitlin Rose
The Stand-In came out earlier in the year and with no Irish tour dates announced despite a decent fanbase I expect the Nashville's 21st century first lady to appear on the bill somewhere.

Daft Punk
The kings of the mundane dance tune have been tipped for pretty much every Picnic since the festival's inception. Oddly, now that the French duo have a new record on the way, this year seems to be different. So they will probably play this year just to spite everyone.

The Polyphonic Spree
Past performers with a penchant for uplifting covers of classics and fit The Flaming Lips category nearly as perfectly as Wayne Coyne and team themselves. Very colourful. Very indie. Very Electric Picnic.

*These are only calculated guesses, nothing more, nothing less. Let's see if I get any of them right.


The initial announcement for Electric Picnic 2013 will be made at 12.15pm today

For more on Electric Picnic visit: