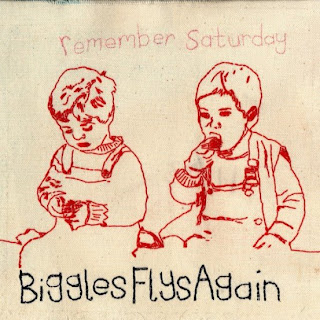 Diligently dealing in "lo fi wistful pop music", the Conor Deasy-led Biggles Flys Again released the slow burning golden ember that is Remember Saturday last weekend and is now taking the twelve-track bag of three-minute melodic nuggets on an official tour with Cork's The Roundy tonight's destination. Let "oh-he-of-the-syrupy-voice" i.e. Conor himself, walk you through the playlist he recently compiled especially for www.thegmanworld.com ahead of his Castle Street début. Not for one second am I surprised to see Stephen Merritt's name appear below.

The Kinks - 'People Take Pictures of Each Other'
The Kinks were one of the first bands I loved. They are the kings of short, sharp pop songs with great hooks and clever lyrics. I absolutely love Ray Davies' voice and he's the master of combining funny and sad lyrics.

Gruff Rhys - 'Gwn Mi Wn'
I'm kind of a sucker for Gruff Rhys. He could probably record an album of just him humming show tunes from Oliver and I'd think it was genius. This is from his first solo album which isn't his best but just has a lot of charm. He played in the sugar club on this tour, I missed it but apparently it was like a stand up comedy gig. I've laughed out loud at some of his lyrics.

Nick Drake - 'Cello Song'
This was the first Nick Drake song I ever heard. I bought An Introduction to Nick Drake when I was in school because I thought the cover looked cool. This is the first song on it and as soon as I heard the vocal and cello line coming in I was done. Also the string arrangements on his albums were always amazing.

Harry Nilsson - 'One'
My friend introduced me to Harry Nilsson's music a couple of years ago and for a while he was practically all I listened to. I like the way he's this rough living, hard drinking guy that makes this sweet colourful pop music. This song is so great, apparently he got the idea for the intro from the engaged tone on a phone.

The Magnetic Fields - 'Meaningless'
My friends are all really into this album: it has soundtracked a lot of nights. Lyrically it's so witty and sharp. I like the way the recordings are a little rough, it sounds spontaneous. I went to see them in the Olympia last year, I'm not sure if I like Stephen Merritt as a person too much but this album will always be a masterpiece. (Click here for an interview with The Magnetic Fields

Supertramp - 'Goodbye Stranger'
For a good while Breakfast in America was the only album in my car. I'm worried that I've gone to a bad place, but I don't think there's any turning back. What can I say, this is where pop music went to in the late 70s. I'm kind of fascinated by how overblown the whole thing is. I like to imagine these musically academic men in their thirties spending months on end in some ridiculously expensive studio in L.A. recording ten minute orchestral pop songs. I suppose it's where I'm headed. Also I'm in love with their keyboard sounds.

Buzzcocks - 'What Do I Get'
I love Buzzcocks for everything that Supertramp aren't. Simple short pop songs with no overdubs. They're definitely my favourite punk band. They had some cool chord changes and Pete Shelley's lyrics are great.

The Gaylads - 'It's Hard to Confess'
The first band I was in was called the Urban Funk Exlosion. We were five middle class Irish teenagers trying to write reggae and funk songs. One of the funniest was called 'Reggae Superstar' about us moving to Kingston and becoming rich and famous. Anyway I still like reggae and my favourite type is rocksteady. The vocal harmonies are always so good. It reminds me of early soul or doo wop records, kind of spooky. This song is a cracker.

Richard Swift - 'The Original Thought'
I was listening to the Atlantic Ocean album a lot when we were recording the Biggles album, and it was definitely an influence. It references older lush 60's and 70's pop music but combines it with weird synths and very modern production, which is kind of what we were going for too. He's playing keyboards with The Shins at the moment but I wish he'd make more solo albums.

Jonathan Richman - 'Little Red Elvis'
I love Jonathan Richman's music. I saw him play in The Village in Dublin a few years ago and it was equal parts brilliant and weird. It was just him and a drummer, he had an old Spanish guitar with no pick up. He played for about an hour and a half. Every now and again he stopped playing mid-song to dance. He seemed like he was gonna cry for most of the gig. When he finished the last song he climbed off the stage into the crowd and walked out the door while everyone just watched him in an awkward silence. This song kind of defines his whole outlook to me.