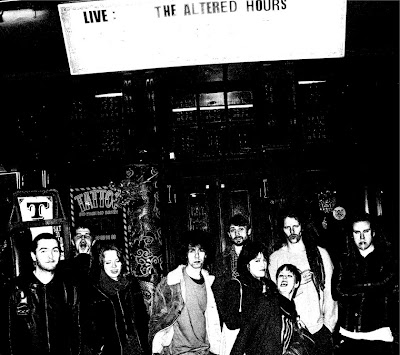 Having warmed the wheels of action with a full Irish tour as support for spacerock rebels White Hills, The Altered Hours gear up for the official unveiling of Sweet Jelly Roll at the end of the month. To be released on April 29th, the 10" is the Leeside quintet's second release following on from the instantly impressive 2011 début EP Downstream (recap) and will feature three tracks, all of which we were delighted to play on last Sunday's The Cork Music Show.

The lead track 'Sweet Jelly Roll' displays immediate evidence of the quintet's sonic evolution, slinking away from the sixties-saturated Velvet Underground-influenced tones towards the more ethereal, dreamscape of Kevin Shields and his My Bloody Valentine cohorts. Elaine Howley's crystalline vocal directs the venture forward majestically, with the relentless rhythm section punctuated perfectly by guitarist Kevin Terry's little box of effects. The melody is a simple-yet-effective vehicle but there is so much going on beneath the hood such as that gorgeous little spacey organ riff and the subtle layering of spectral vocals all playing over Cathal MacGabhann's consistently crunchy chords. It says as much about the increasing maturity - and versatility - of the group that lead singer MacGabhann can happily sit out singing duties on the lead single before effortlessly returning to top form for b-sides 'Smoke Your Eyes' and 'Everyone is Inside'. Stream 'Sweet Jelly Roll' below.

For more on The Altered Hours visit:

- The Altered Hours will release Sweet Jelly Rolly on 10" vinyl on 29th April.
- Grab a copy from Plugd Records, Cork or your local indie store