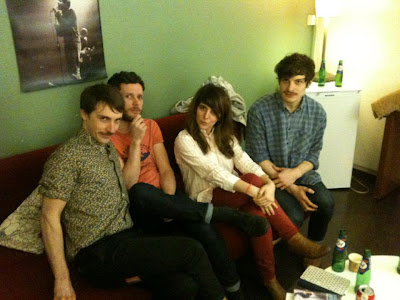 The G-Man: What is your favourite record store, where is it located and why does it hold a special place in your heart?
Antoine (Arch Woodmann): My favourite record store is Ground Zero, Place St Marthe in Paris. It's one of the first stores I have visited in Paris. It's located in Belleville which I love. The records really don't cost too much and you almost feel in your own place once you've begun searching what you're looking for.

What is the first record you have ever bought?
I can't remember and if I did I think I shouldn't remember.

Do you visit record stores when on tour? What is the weirdest (or simply most original) record store that you have ever visited?
I'm afraid I usually don't have the time to visit record stores when I'm on tour. But just close to the place I live there's a guy, selling piles of hi-fi stuff, repairing cameras etc, and he has some records too (krautrock, rock, funk, soul, 60's, 70's stuff in general). He smokes weed with his friends in the store. He doesn't give a shit!

Being as truthful as you possibly can, what record is your guiltiest pleasure?
I think it must be Blood Sugar Sex Magic by the Red Hot Chili Peppers. I've not listened to it for years but I know I still love that record.


What would you say to a young music lover who has never visited a record store before?
"You don't have to buy something, first, act like you were home"

Describe your last record shopping trip?
It take me one hour to choose four records and finally buy a single one, Zun Zun Egui's last record to be precise. I wanted to buy a lot of records for a DJ set but I just can't buy a record if I don't really want it.


Describe what it felt like the first time you saw one of your releases in a record store.
"Shit, the tracklisting is all messed up and the ghost track with 6 minute of silence before it is on track 2 and you can buy in the whole town"

Tom Waits has said "Folks who work here are professors. Don't replace all the knowers with guessers: keep 'em open, they're the ears of the town." What do you think of that quote?
I think there's something to do with the durability of music. There's a huge difference between knowing what will last and what, within the next months, will be a commercial success for example. I feel we're not so concerned today by finding the good "material" that you'll listen to for the rest of your life, or the material that will make you think or that will change your perception of things. Not to be elitist, but you sometimes need to be experienced or trust someone that is experienced to find what could change your perception of things. We needed a professor to discover Fugazi, Godspeed You! Black Emperor, etc. And then I was free to go.

If you owned a record store, what would you name it?
All Delighted Records.

Why would you be an amazing/terrible record store owner?
Because I couldn't sell a lot of records that I can't stand.


For more on Arch Woodmann