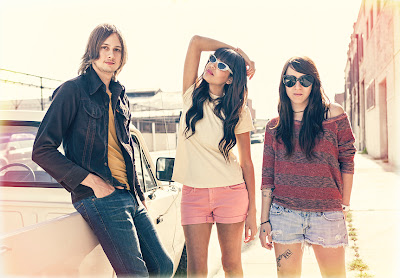 " I just want to keep feeding a place that feeds my record addiction: it's a mutual relationship."
(Kimmy Drake - Beach Day)
Retro rockers Beach Day rake themselves away from Floridian sands to tell The G-Man about their favourite record stores and what Record Store Day means to them...


Hollyweird trio Beach Day's Ronnie Spector-on-a-surfboard styled sunshine pop is as infectious as the want for ice-cream on an August bank holiday Monday. The release of début long-player Trip Trap Attack may be a few months away (June 18th), but lead singer Kimmy Drake - with a little input here and there from Beach Day bandmates Skyler and Natalie - is still available to chat about April 20th and all things record-y.


The G-Man: What is your favourite record store, where is it located and why does it hold a special place in your heart?
Kimmy Drake (Beach Day): Our favourite record store is Radio-Active Records. It's located in Fort Lauderdale, Florida. I've been collecting records for years and they always have what I want. If they don't have it, they can always get it for me.

In January, HMV Ireland closed its doors yet independent record stores such as Plugd Records (Cork) and Tower (Dublin) live on. What role do you feel local independent record stores play in the community as opposed to large chains?
Local record stores are at the heart of local music scenes in every town. It's a place that anyone can go and become excited about new and old music. And you can always find people that are into the same freaky stuff that you're into. You won't find that at Best Buy or whatever. Also, they cater to the lonely, the freaky and the music obsessives. Great places!

What is the first record you have ever bought?
Kimmy: Guns N' Roses - Appetite For Destruction
Skyler: Jackson 5 - ABC
Nat: Nirvana - From the Muddy Banks of the Wishkah

Do you visit record stores when on tour? What is the weirdest (or simply most original) record store that you have ever visited?
When we get to a town early, we always wanna go and check out the town's record store! The most original and one of our favourite record stores is Grimey's in Nashville, Tennessee. We played there last summer and it was awesome! They have such an amazing selection of records and they have a venue downstairs and a beautiful park across the street. Awesome shop!

Being as truthful as you possibly can, what record is your guiltiest pleasure?
Kimmy: Shakira - Laundry Service. So embarrassing...
Skyler: Toby Keith - Greatest Hits Volume 2.
Nat: Katy Perry - One Of The Boys. 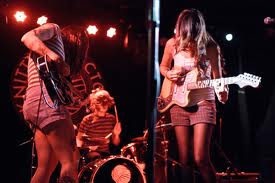 What would you say to a young music lover who has never visited a record store before?
I would say open the door slowly, walk inside, look around, take it all in. You'll want to remember your first visit. You'll be coming back for the rest of your life.

April 20th 2013 will be the sixth annual record store day. Any fond memories from previous Record Store Days that you would like to share?
I've been going to Record Store Day consecutively for the last 4 years. It just keep growing. Every year it gets bigger and bigger! Record Store Day 2010 was really fantastic, I couldn't believe how much bigger it was from the year before. I discovered a great local band there that year. Record Store Day 2012 was so amazing because our band got to play at Radio-Active Records. It was a huge party with lots of great bands, hundreds of people, vendors and our favourite food trucks.

Describe what it felt like the first time you saw one of your releases in a record store.
It was really exciting to see our first 7" (Beach Day) in a record store. It's just a feeling of pride and accomplishment. And it's really humbling. I felt so grateful - like the universe was on my side for a moment.


For more on Beach Day visit: