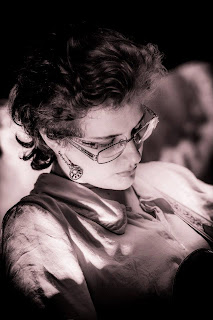 Cal Folger Day goes a bit mad with power at the thought of owning her own record shop one day...

Enthralling New York-based chanteuse Cal Folger Day has a new EP Drom-d'reau on the way on May 1st before jetting across the silvery pond to appear as special for Angel Olsen in Cal Folger Day play Half Moon, Cork just two days later. But first...let's talk some records. 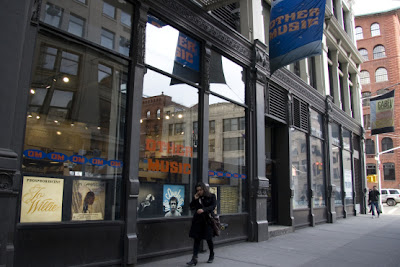 The G-Man: What is your favourite record store, where is it located and why does it hold a special place in your heart?
Cal Folger Day: Well I'm always liable to spend a lot of time in Other Music. It's like the Stuart Little record shop of Broadway, kinda lost on a block of big boxes. They have a lot of vinyl, good used CDs, handwritten reviews of staff faves, etc etc.

In January HMV closed its doors in Ireland yet independent record stores such as Plugd Records (Cork) and Tower (Dublin) live on. What role do you feel local independent record stores play in the community as opposed to large chains?
Well I won't presume to comment upon how an Irish community would work, except to say that the cultural economy seems very different. In America we lost our "HMV" equivalents a long time ago (I was 11 when the one in town closed), and now I guess the mainstream option for physical music is the CD cave that you can find in large editions of Barnes & Noble Booksellers. Fringe-boutique independent record stores tend to be a physical incarnation of the "blogosphere", and sort of a gift-shop of certain local venues. They vend objects that draw your shadowy restless nightlife into your sunny sober apartment. They showcase little books, provide gig promotion, host acoustic shows, have some connection to good coffee and cake. As opposed to the large chains, a lot of it seems relevant to my life and what I'm interested in hearing. But I'm a likely suspect.

What is the first record you have ever bought?
'Tubthumper', Chumbawumba; single CD.

Do you visit record stores when on tour?
I was pretty deep into Mono in Glasgow, which I visited on purpose when I was playing a show there. They have a whole zine/chapbook store too, and to my delight they're now stocking my housecleaning manual there.

Being as truthful as you possibly can, what record is your guiltiest pleasure?
No shame! Je ne regrette rien! Okay, but you're looking for -- Something about this "guilt" should go along with predictability, I think -- each listener's guilty pleasure should be something that's easy & lazy. And according to that definition, maybe, like, Paul Simon, a staple of my mother's cupboard. My favourite album of his is Rhythm of the Saints, which I'm guessing was a follow-up to Graceland, this time he's working with South American percussionists.

What would you say to a young music lover who has never visited a record store before?
It's totally hip to feel like everyone's staring at you and judging what you're thumbing through - give them something to work with. As for yourself, try and have $10 to work with!

Describe your last record shopping trip?
I went in to purchase a real live CD as a gift for my father. I found it (the new St Vincent/David Byrne collaboration) and also intricately admired a lot of box-set packaging concepts. Then some local folksinger that I'd never heard of had released a first album. They'd put it out on a recommended shelf and I splurged on that too, and headed over with it as a birthday gift for Alex Penman, who's producing some recordings of mine right now. We listened on nice speakers in the studio, it was pretty good.

What does Record Store Day mean for you?
A good chance to hear some new music. Who knows what's going on? I certainly don't! Something actually new, always takes a bit of diligence. Or maybe just luck, in which case it's a good reminder to keep your mitt open!

Describe what it felt like the first time you saw one of your releases in a record store.
Ha, thanks for asking! but I'm still just selling CDs myself online and at shows … when this 7" comes out on May 1st, I'll shop it around. 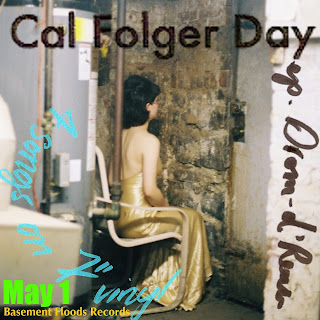 Tom Waits has said "Folks who work here are professors. Don't replace all the knowers with guessers: keep 'em open, they're the ears of the town." What do you think of that quote?
Curators are critical, for sure. It's not an era of flag-bearing DJs. I find it's often a major turn-off to track down new stuff online. So there's the potential for an individual, who happens to live near you, to open a real window for you, because they've been obsessively doing their homework. Because that's their job.

If you owned a record store, what would you name it?
Oh it would almost certainly depend on local landmarks, place names, flora, or fauna! Like if I opened a record store in Key West maybe it would be, "The Tuning Key." Something corny like that.

Why would you be an amazing/terrible record store owner?
This question really requires that I know myself. I'd say I'd be way too gung-ho, for about 4 months. Then I'd realize it's very hard & stressful, and the same kinds of challenges would be the ones that keep cropping up, and then hopefully I'd bequeath it to someone very worthy and better suited, and if I'm lucky I'd still get credit for its inception, although I'd never taken responsibility for it.

Cal Folger Day will release 'Drom-d'reau' on May 1st before playing Half Moon Theatre, Cork on 3rd May