"The Vinyl Countdown"
Folk-pop sextet The Crayon Set are probably more preoccupied this week with preparing to release a record than to think about going vinyl shopping as they ready themselves to launch début long-player The Crayon Set in Whelan's on Sunday night. Or so you would think. Step forward fellow g-man George Guilfoyle, nominated by his cohorts as the most record-savvy crayon of the box. Here's what George thinks about the whole deal. 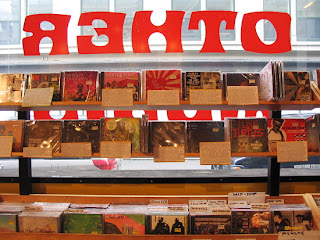 The G-Man: What is your favourite record store, where is it located and why does it hold a special place in your heart?
George: My favourite was gone the last time I was there, along with my memory of its name. I drifted in and out in a daze of what was playing at the time. The name may have involved an 'x', an 'a', a 'b' and an 'r' - or some other letters that make up an actual word...so next best for same reasons and in general vicinity is Other Music in New York, first shop I'd been to with descriptions on the records so you could follow the label, side projects and/or other various or tenuous links to more music otherwise undiscovered. I was listening to a lot of Cat Power at the time, these stores did little to discourage that.

In January HMV closed its doors in Ireland yet independent record stores such as Plugd Records (Cork) and Tower (Dublin) live on. What role do you feel local independent record stores play in the community as opposed to large chains?
It's a link to a local scene that larger stores have no interest in. The ability to go into a shop and get talking to someone who knows someone in some band that recommended something amazing and here it is and your day is complete. There's a certain redhead in Tower that's particularly wise and delightful...

What is the first record you have ever bought?
The first meaningful record I bought was Beck - Mellowgold. The first actual one was the George Harrison single 'I Got My Mind Set on You'. I still want a room that dances along like a media player visualisation.


Do you visit record stores when on tour? What is the weirdest (or simply most original) record store that you have ever visited?
I had a minor misunderstanding in a shop in Hong Kong with a guy holding a squid...does that count?

Being as truthful as you possibly can, what record is your guiltiest pleasure?
Bic Runga is a wonderful artist, I have no guilt.

What would you say to a young music lover who has never visited a record store before?
'C'monnn!', using gob emphasis.

Describe your last record shopping trip?
The trip itself was boring, Yo la Tengo and James Yorkston are not

What does Record Store Day mean for you?
Fun gigs around the place, happy heads, music for the joy of it. Isn't it always sunny too?

April 20th 2013 will be the sixth annual record store day. Any fond memories from previous Record Store Days that you would like to share?
Saw that wee Villagers fella perform standing on the counter in Road Records. It was really quite good.


Describe what it felt like the first time you saw one of your releases in a record store.
I had the strongest compulsion to rob it to see what would happen, still not sure anyone would've cared though.

Tom Waits has said "Folks who work here are professors. Don't replace all the knowers with guessers: keep 'em open, they're the ears of the town."What do you think of that quote?
I don't think music requires knowledge, but then I also like his joke about the New Yorker and the box of bees.

If you owned a record store, what would you name it?
The Vinyl Countdown. Has that been done already?

Why would you be an amazing/terrible record store owner?
I'd be terrible for only stocking for the niche market of me. 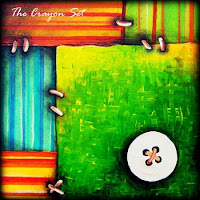 For more on The Crayon Set