Echo Lake's Thom chatters with The G-Man about Bob Trimble, shitty 70/80/90's music and his general love for music stores...

Linda Jarvis and Thom Hill, collectively known as Echo Lake gracefully announced themselves to the world with last year's dazzling dreampop début Wild Peace (appearing at #9 on the The G-Man's Top 50 albums end of year list). Thom is another avid independent music store fan who is looking forward to Saturday, April 20th.


The G-Man: What is your favourite record store, where is it located and why does it hold a special place in your heart?
Thom: In my head it's a store called The Plastic Factory, which was a great store in Birmingham that is closed down now. My uncle used to be a buyer there and it was before the time of the whole grunge explosion, he used to go to America and bring back records by all these great bands that people couldn't get anywhere else. My dad used to do weekends there so when I was really young I used to hang out there with them while they worked. My memories are very vague but it was a great place to be. Always great music playing and of course the people who hung out there were cool, as a five year old kid it was pretty exciting. I think it had a pretty big effect on me, especially the music I grew up listening to.

In January HMV closed its doors in Ireland yet independent record stores live on. What role do you feel local independent record stores play in the community as opposed to large chains?
It's a tough one, it has to work both ways doesn't it really. I mean, where I work in Crouch End, we have a great record store called Flashback and it does really well, it's always really busy and it's a great place to buy records. Yet in Birmingham there's only one independent store left in the city centre. So it seems crazy to me that indie stores can't survive in the heart of the second city but they can in a small leafy suburb of North London.

I think here they really value not having big chains as part of their high street and maybe that's why smaller businesses are thriving. It's probably tougher in city centres because it's usually a shopping destination for people, so you have to compete with the big chains, also the internet too. I admire any independent store that is still going and long may it continue because times are really hard. I think they play a vital role in communities but they still have to offer something that people can't get anywhere else for the community to value them.


What is the first record you have ever bought?
I think the first record I brought with my own pocket money was maybe Blur's Leisure. To be honest, I was pretty lucky growing up because my parents were into good stuff! I had access to great records, on vinyl too. My mom always loved classic pop and my dad the more alternative stuff. So I could go from Carly Simon, to The Beatles, to Sonic Youth - it was great. I do remember being like 7 years old or something and wanting to buy Ini Kamoze's 'Here Comes the Hotstepper' on cassette tape from Our Price. Remember Our Price?!

Yeah we visit a lot on tour, we've done a few instores too. I have to say the most original is Rough Trade East, I know that sounds a bit obvious but it's such a great store. I live about two minutes away so I always go there to buy stuff. It's such a weird place, they sell everything, like coffee, shoes, electrical kits and soldering irons, clothes, books, they put on live gigs and you can still pick up a great record.

What would you say to a young music lover who has never visited a record store before?
GO! And fully embrace being too shy to ask the guys or girls behind the counter what the record playing is because it wouldn't be cool. It's all part of growing up.

Describe your last record shopping trip?
I went to Kristina records in Dalston and bought a Bob Trimble record, which I hadn't listened to in years and a Cloud Land Canyon record because our bassist, Will is good at recommending good drone music.

What does Record Store Day mean for you?
I think it's great. It's nice to have a day that always creates such a buzz, not only about the music but the stores themselves. Also it's awesome that labels release limited edition records as part of the celebration.
But I also think that it's no good just doing it once a year, I hope it reminds people to make more of an effort to support their local record store all year round.

April 20th 2013 will be the sixth annual record store day. Any fond memories from previous Record Store Days that you would like to share?
I have a terrible memory but I'm pretty sure that we played in Leeds two years ago on record store day. That might be a total lie but I think it happened. Anyway if it did, that was a good day. We played with Spectrals and it was the first time I had seen them. Good times! 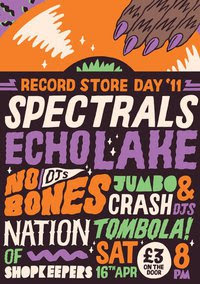 Describe what it felt like the first time you saw one of your releases in a record store.
It felt great, it's something I had always wanted but never actually thought it would happen, so it was quite surreal really.

If you owned a record store, what would you name it?
It would be in Birmingham and I would call it 'HaHa Sound' in honour of Trish [Keenan] and Broadcast.


For more on Echo Lake