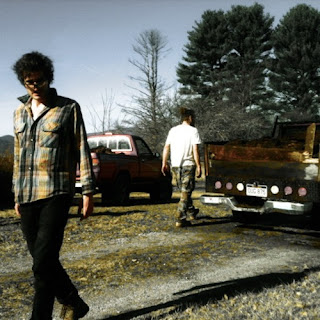 "Bukka White, Son House, Robert Johnson...for a town with two street lights, it was pretty amazing that you could ﬁnd those records."
Daniel Lefkowitz and Jared Elmore's space-folk project Futur Primitif tour Europe at the end of the Summer including a stop-off at The G-Man's favourite little festival End of the Road. No stranger to the delightful Dorset setting (Lefkowitz is a former member of Low Anthem who have played the festival more times than not at this stage), Daniel recently made eyebrow-raising observations concerning the date of this year's Record Store Day. 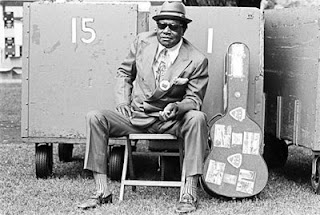 The G-Man: What is your favourite record store, where is it located and why does it hold a special place in your heart?
Daniel: Not sure of the name, it might not have had a name. It was in my home town, Strasburg, Virginia. A little country town with too many antique stores. It was in one corner of a big indoor ﬂea market. All around were shelves full of old plates and pocket knives, chairs and cast iron skillets and unused knickknacks of all variety. The record store consisted of four or ﬁve tables covered on top and below with crates of vinyl, organized by genre. I used to go in there and ﬁnd old blues records, Bukka White, Son House, Robert Johnson. The prices were not ﬁrm and you could usually talk them down a bit. For a town with two street lights, it was pretty amazing that you could ﬁnd those records.

In January HMV closed its doors in Ireland yet independent record stores such as Plugd Records (Cork) and Tower (Dublin) live on. What role do you feel local independent record stores play in the community as opposed to large chains?
I suppose it's the personal touch. The inventory of a local record store represents the whims and wishes of its owner. Whether you can ﬁnd anything you want or only some weird shit, at least it's an individual. The big chains stock the same thing everywhere. They contribute (like every chain) to a homogenization of the landscape.

What is the ﬁrst record you have ever bought?
It was Kriss Kross, can't remember the name of the album. For those not in the know, they were a rap duo of two twelve year-olds who wore all their clothes backwards. They were great. Their names were Mac Daddy and Daddy Mac.


Do you visit record stores when on tour? What is the weirdest record store that you have ever visited?
Of course! It's always a great way to get rid of that pesky gas money. The weirdest is probably the one I talked about before, in the ﬂea market.

Being as truthful as you possibly can, what record is your guiltiest pleasure?
The Beach Boys, Endless Summer. I actually feel no guilt whatsoever. But it should probably fall into that category nonetheless.

What would you say to a young music lover who has never visited a record store before?
Well sonny, when I was a kid, we used to pay for music! It came in a plastic case, wrapped in plastic and under that an impenetrable sticker sealing the top. Once you got past that, one of the two little plastic hinges would break off and you would never be able to keep the thing closed. The best thing to do with it then was to put it on the ﬂoor in the back seat of your car with all the rest, and just accept the impermanence of the world and everything in it.

Describe your last record shopping trip?
I went to my local record store and bought Yo La Tengo's new album Fade. It was on the day of its release. I had been waiting for it and I was in and out. I think they had it on display in front of the register. One of the most satisfying record purchases I’ve had. That album has such beautiful packaging.

What does Record Store Day mean for you?
I've never heard of it before! Is it a British holiday?

April 20th 2013 will be the sixth annual record store day. Any fond memories from previous Record Store Days that you would like to share?
Not to be a drag but I believe this is Adolf Hitler's birthday. It's also 420 day. I wonder why they picked this day of the year? Seems like a strange choice to me. I guess last Record Store Day was a nice one. I was just chilling with the gang, burning some books and listening to The Wailers...

Describe what it felt like the ﬁrst time you saw one of your releases in a record store.
Well I had gone in with the CD stuffed in my back pocket. I pretended to look for a Peter Frampton record and I slipped it into the 'F' section right behind The Fugees. Then I took a picture for Mom, who would obviously be proud.

Tom Waits has said "Folks who work here are professors. Don't replace all the knowers with guessers: keep 'em open, they're the ears of the town." What do you think of that quote?
Waits is a smart man. He’s got a knack for a good quote. Ya, I agree. Even if some are assholes and snobs, at least they care.

If you owned a record store, what would you name it?
Cowabunga. I would be an awful record store owner. Customer service is not my strong suit. I'd rather have a breakfast joint. I love frying eggs. I could just stand behind the grill and be an asshole and it wouldn't matter as long as the eggs were good.

For more on Futur Primitif visit: