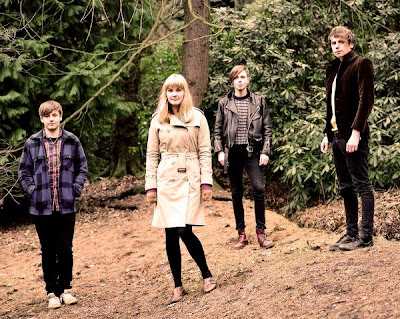 Just Handshakes played their very first Record Store Day instore last year and have again cooked up something special for 2013. But they're keeping it well under wraps. The cheeky buggers...

West Yorkshire indie popsters Just Handshakes are gearing up to release brand new record Say It on May 20th. The Leeds foursome's first single from that record, 'London Bound', has delighted many an ear resulting in spontaneous bouts of serious foot-tapping around the UK (with the odd knee-slap thrown in their for good measure) and the odd soundhole in Ireland too (recap here). Clara and Mike took time out from their preparations to talk a little about Leeds record stores and the big day in question. 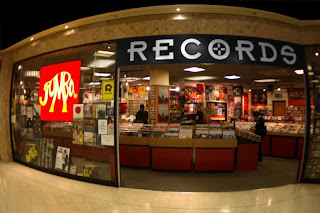 The G-Man: What is your favourite record store, where is it located and why does it hold a special place in your heart?
Mike: We’re pretty lucky in Leeds because we have 2 really good independent record shops. Crash is great but Jumbo Records* is my favourite.
Clara: The staff are friendly and helpful and really passionate about music. And they’ve always
supported us by stocking our releases.

*I've actually been there. Amazing store! Picked up Sharon Van Etten's Epic and a Ducktails album. Arcade Dynamics I think. On with the interview..


What is the first record you have ever bought?
Clara: I can remember spending my pocket money on cassette tapes but I don't really remember the first one I bought. We used to listen to my mum’s old records and tapes and I can remember her giving me the Velvet Underground and Nico album and falling in love with it.
Mike: I had what I remember as The Best of Little Richard on cassette tape that I got off my parents when I was quite young.

Do you visit record stores when on tour? What is the weirdest (or simply most original) record store that you have ever visited?
Mike: We've never really been on a big tour so we haven't had chance to visit many, but we do visit record shops whenever we play in different cities. Piccadilly Records in Manchester and Rough Trade Easts are two of our favourites.

Being as truthful as you possibly can, what record is your guiltiest pleasure?
Clara: I secretly love dancing to Eurythmics.

What would you say to a young music lover who has never visited a record store before?
Clara: GO NOW! Support your local record shop!

Describe your last record shopping trip?
Clara: My last big shopping trip was in December and I bought these albums as Christmas presents:
I Thought I was An Alien - Soko
By The Sea – By The Sea


What does Record Store Day mean for you?
Clara: Lots of exciting releases, lots of in store gigs and probably lots of queuing.

April 20th 2013 will be the sixth annual record store day. Any fond memories from previous Record Store Days that you would like to share?
Mike: Last year we did our first Record Store Day release. We recorded the tracks live in our basement and released it on multi-coloured tapes. Each one is numbered and named after a different bird. We’ve still got a few left on our bandcamp. We did an in store gig at Jumbo Records too which was great. We also have plans for something this year too but have to keep it under wraps for now unfortunately.

Describe what it felt like the first time you saw one of your releases in a record store.
Mike: It was great! The first few releases that we did were DIY singles that we sold at gigs and in record shops so it meant a lot that people showed an interest and stocked it in their shops and it still does now.

If you owned a record store, what would you name it?
Clara: I would like to call it Retriever Records…because I like golden retrievers (but I don't think the others would be very impressed)