Record Store Day: Interview with This Is The Kit 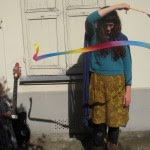 Kate Stables of This Is The Kit talks black and white pancakes ahead of record store day...

The G-Man is becoming quite giddy and excited ahead of This Is The Kit's début Cork performance which will take place in the Triskel Arts Centre's TDC on May 25th. Before then, singer, songwriter and all-round fearless leader Kate Stables chats all things vinyl with The G-Man.

The G-Man: Hi Kate! So what is your favourite record store in the world?
Kate: Without a doubt, Off The Beaten Tracks in Louth, Lincolnshire. It's special because it's run by a most excellent man called Mark and it's a proper all round something for everyone indie record shop.

What is the first album you have ever bought?
I think it was Bjork's Post on cassette.


Do you visit record stores when on tour?
Yes, if ever there's enough time I always like to find: local record shops, libraries, and if possible, swimming pools.

Being as truthful as you possibly can, what record is your guiltiest pleasure?
I must admit my five year old daughter has recently introduced me to 'Zumba' by Don Omar. Shocker.

What would you say to a young music lover who has never visited a record store before?
Go and visit a proper music store.

Describe your last record shopping trip?
Well it was in an excellent record shop in Paris called Ground Zero where a while ago I'd left some of my records for them to sell, and when I arrived at the till with my Zombie Zombie record and Kimya Dawson CD, they informed me that they'd sold some This Is The Kit stock and owed me money so I only needed to hand over €6 for my two items. "Looks like everyone kicked a goal!"

What does Record Store Day mean for you?
An excellent excuse to celebrate not only proper record shops, but proper shops of all kinds, and proper records of all kinds also and the awareness there of. Music and creativity and people doing things together on the same day all over the world. I'm a sucker for an international-day-of... Plus sometimes it's tricky to get round to one's local record shop for what ever reasons life may throw at us, but on record shop day you make the extra effort to get there and to join in/have a look.

April 20th 2013 will be the sixth annual record store day. Any fond memories from previous Record Store Days that you would like to share?
Nothing specific, simply the all round fun to be found in any record shop: People doing instore concerts, people releasing special records just for that day. General positive wave.

Describe what it felt like the first time you saw one of your releases in a record store.
It felt a bit like it must have been some prankster friend getting hold of some copies of my record and planting them in a shop without the shop's permission. It still does in fact.

Tom Waits has said "Folks who work here are professors. Don't replace all the knowers with guessers: keep 'em open, they're the ears of the town." What do you think of that quote?
Nail on the head Mr Waits. That's what I wish I'd said to the previous question.

If you owned a record store, what would you name it?
Either 'This is the Disc' or 'Black and Silver Pancakes (and Tapes)'.

Why would you be an amazing/terrible record store owner?
I woudln't be great as an owner: no management skills whatsoever. But I'd be very pleased to be a shop assistant, the Saturday helper. I do enjoy a bit of customer service, not to mention tidying shelves and putting things in rows.


For more on This Is The Kit visit: