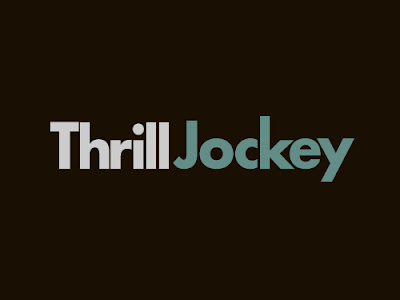 A self-confessed "hopeless and incurable record collector", Bettina Richards founded independent record label Thrill Jockey from her Manhattan apartment before moving the operation to a more sustainable location in Chicago. The relocation obviously being a masterstroke, the label celebrated 20 years in business in 2012 having released records from an incredible array of artists including The Sea And Cake, Tortoise and David Byrne. Closer to home, Plugd Records - perennial defenders of the Thrill Jockey stable, hosted Alexander Tucker in May 2012 and recently teamed up with Cork blog Fractured Air to announce the arrival of Mountains in a couple of weeks time (May 8th) not to mention the recent visit of White Hills. Being a label owner, it is to be expected that Bettina is a record store fan. It simply makes good business sense. Yet it's plainly obvious within seconds of the interview that, even if (god forbid) she had not founded Thrill Jockey in the first place, she would be championing the good cause regardless.


The G-Man: What is your favourite record store, where is it located and why does it hold a special place in your heart?
Bettina Richards: I buy tonnes of records. I love records. I honestly do not have a favourite shop - I love any record store that I score something I am looking for. I live in Chicago and we are blessed with a bunch of good stores and I mail order records just as often and recently received a Peter Green record [in the post] from a store in Germany. I buy my records from mom and pop aka independent shops, not chains.

The G-Man: In January, HMV Ireland closed its doors yet independent record stores such as Plugd Records (Cork) and Tower (Dublin) live on. What role do you feel local independent record stores play in the community as opposed to large chains?
I find the independent retailer to be not only rabid music fans (as I believe many of the chain store staff to be) but as vested in the music as those who make it or those who advocate for it. They create community because it matters to them. Large corporations have a great deal of difficulty being an active force in a local community because their first priority is a national regional bottom line. This effects their buying practices and their very size makes it difficult for them to react locally.

The G-Man: What is the first record you have ever bought?
The first record I ever asked for was the sound track to Saturday Night Fever - my mom bought it for me. The first record I ever went to a store and bought was probably a 7" single by Foreigner. While I was a kid, I was in fact buying records in the late 70s. Going against trend I buy a lot more records now than when I was a wee one.

The G-Man: Do you visit record stores when on tour? What is the weirdest (or simply most original) record store that you have ever visited?
I go to record stores everywhere I go. There was a record store in Tokyo dedicated to the fluxus movement [an artistic ideology influenced by experimental composer John Cage and French artist Marcel Duchamp]. I am a fan of Joseph Beuys and I picked out five records to buy. Then the clerk told me they ranged in price form 300-500 dollars each - I put them back. Knowing there was a store like that was enough. I left happy.

The G-Man: Being as truthful as you possibly can, what record is your guiltiest pleasure?
I love Fleetwood Mac so much that I even like Mirage.

The G-Man: What would you say to a young music lover who has never visited a record store before?
You do not yet understand true love.

The G-Man: Describe your last record shopping trip?
Yesterday, I met a band we work for Guardian Alien at a record store, because it was an easy place to meet up and it was raining. I walked out with a Waitain record I was missing and two Decca-era Kitty Wells records I did not have.

The G-Man: What does Record Store Day mean for you?
Everyday is record store day. Every, every day. Knowing that is not the case for plenty of people we try to release records for, Record Store Day will remind them how fun it is - to go and to find and to listen.

The G-Man: Describe what it felt like the first time you saw one of your releases in a record store.
It was really great. I worked in the store so it was displayed really well...


For more on Thrill Jockey visit: