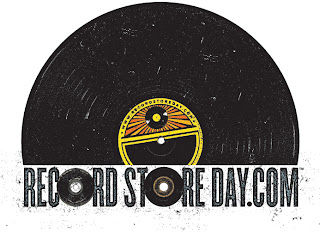 "I visited a tattoo parlour that also sold records somewhere in Cornwall. You could sit and choose a new album while you waited to be inked,"
Since meeting Bring The Noise's lovely Charlotte "Lotti" Owen at a delightful festival in Dorset last September, I have consistently pestered her to take part in all sorts of G-Man blog related shenanigans (such as February's Listen Up special). Fortunately, Lotti is an incredibly good sport so is back to tell us all about record stores, tattoos and vinyl-related vortexes. 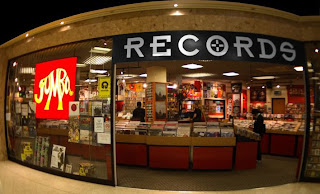 The G-Man: What is your favourite record store, where is it located and why does it hold a special place in your heart?
Lotti: My favourite record store is actually back up north in Leeds, Jumbo Records. It is special to me because I worked in the same shopping centre, and it was my escape if I was having a bad day, or just fancied a look. I would always walk in with the atmosphere both welcoming and reassuring. I kind of liked that it was tucked away in the corner, as if it was a doorway to another universe. The music was always blaring, and I would tickle my way through some records before immersing myself into the wall of up and coming gigs in Leeds. It just feels so magical there for me, everything was dedicated to good music, how it should be.

What do you get from local independent record stores besides the obvious?
Independent record stores are great because there is no pressure to dedicate homage to flimsy chart toppers. The energy you feel when you enter a good Independent record store is one of understanding, you have come to indulge in proper music. The staff are passionate about what they sell, and more knowledgeable, and you can have a real conversation with them that stretches farther than where the rock section is.

What is the last record you bought?
I actually bought James Blake's Overgrown today. I have yet to listen to it fully, but I have been waiting patiently for it, and cannot wait to transport myself into Blake's wonderfully captivating world.

How has a record store benefited your life/current job etc.?
With today's technology, it is far easier for the modern day worker to simply press a button and purchase their music online. The benefits in which a record store has had on my life, and my job, however is easy. Record stores for me, are an escape from reality, they have kept me sane. You can't capture the atmosphere of a record store online, you could simply walk in for one album, spot another one that you have been eager to hear for a while, and feel enticed by the album currently being played in the store. Therefore, these stores have put more albums onto my lap than if I was shopping online, and mean that I have a wider knowledge.

Do you visit record stores when you head off on holiday? What is the weirdest (or simply most original) record store that you have ever visited?
I visited a tattoo parlour that also sold records somewhere in Cornwall, that was pretty cool. You could sit and choose a new album while you waited to be inked, I thought it was a great idea. I remember a Mayday Parade record was playing when I got my first tattoo, and although in that parlour they didn't sell records, I focused on the tracks rather than the pain of the tattoo, and I actually went out and bought the album afterwards.

What would you say to a young music lover who has never visited a record store before?
I would encourage any music lover to experience the thrill of visiting a record store, it is like a child in a sweet shop. You get to meet like minded people, and have endless albums to keep you busy for as long as you need.

Describe your last record shopping trip.
This time I knew which record I was after, and my budget prevented me from indulging too much. For me, it is always hard to pass the New Releases section, there is always so much excitement.
If I have the time, I will scan the new releases section, but most of all I have to listen out for the music that is playing as I enter, because I believe this is a major affect on my trust in the record store. I am very sensitive to the music playing; if I walk in and Kate Bush is playing, for example, I would be more coaxed into spending my money, rather than if Taylor Swift is bellowing about another ex while I am trying to find proper music.


What does Record Store Day mean for you?
Record Store Day is very necessary, especially with the rise of illegal downloading, Youtube, or even just online stores. This musical appreciation should be celebrated in stores, it is heartbreaking that we are now losing so many of our record stores that have provided escape for thousands of people like myself, who want that whole personal experience. Music is about an emotional connection, channelling those feelings that take over us, and sharing it with like minded people.

April 20th 2013 will be the sixth annual record store day. Any fond memories from previous Record Store Days that you would like to share?
Unfortunately, the past few years I have been working on Record Store Day so I have missed out on all of the exciting events, but just the general energy surrounding it is something that both inspires, and reassures me.

Have you got eyes for any special RSD releases this year?
I am really looking forward to hearing the Manchester Orchestra/Frightened Rabbit/Grouplove tracks for Record Store Day. I am a big fan of both MO and FR so it will be interesting to finally hear Architect.


If you owned a record store, what would you name it?
I would name my record store to fit the world I would create instore, something like 'The Vortex', but a bit more creative. You would walk in and be immediately sucked into the whole focus on music. It would be generously decorated with couches, and coffee machines, where you can sit and listen to the records before you buy them. I would regularly hold small gigs there where new bands could come and play live while customers shopped around.


Read articles by Charlotte Owen over on www.bringthenoiseuk.com
For more on Bring The Noise visit: