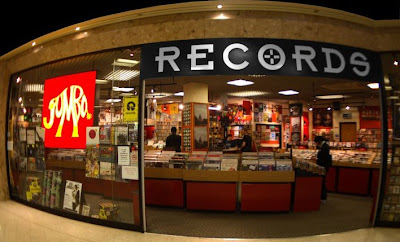 "Record Store Day...an excuse to throw a party!"
Jumbo Records
5/6 St Johns Centre, Leeds, England
Website: www.jumborecords.co.uk
Contact details: +44 113 245 5570 or info@jumborecords.co.uk
I once spent a lonely and quite boring few days in Leeds. A dodgy Johnny Depp movie (you know the one, he plays a quirky lead role with Tim Burton directing) was all I had to keep my dust-gathering mind occupied for the first couple of days but that was until I stumbled upon the shining beacon of 1st floor, St. John's Shopping Centre-light that is Jumbo Records. A reinvigorating browse through the heavily-populated shelves and a cheery chat with the lovely folks behind the counter was consummated with the popping of Sharon Van Etten's Epic and Ducktails' Arcade Dynamics into my lovely Jumbo bag. Counter-king Matt Pullman was on hand that day to wow me with Brudenell Social Club tales as he was earlier in the week to fill me in on what's going down in Jumbo this Saturday.


The G-Man: April 20th 2013 will mark the sixth annual record store day and indie stores all over the world are still going strong. What does it mean to work in a record store in 2013.
Matt: It's a balancing act between living the dream and seeing tax evading big business and illegal downloading destroying what you love so much....

How many of the past five RSDs have been celebrated in your store?
We've done them all so far....

Which one stands out as the most memorable?
I guess they've just got bigger and better as times gone on...So far this one is shaping up to be something really special.

What do you feel sets your store apart from all the rest?
I think each store does its own thing which is what makes things so exciting. We, over the last few years, decided to throw parties and get bands we love to play. This year we have a nice line up with Lone Wolf, See No Evils, James Yorkston, The Ukranians, Serifina Steer, Jess Bryant, Maia and we try to help organise things like the offical Record Store Day UK Beer from Revolutions etc

In January HMV closed its doors in Ireland with many closures in the UK to follow yet independent record stores such as Plugd Records (Cork) and Tower (Dublin) live on. What role do you feel local independent record stores play in the community as opposed to large chains?
I guess what we and the shops you mentioned are good at are adapting and serving our customers, after all, we're music fans like them so we KNOW just the type of service they expect. Plus we're massively ahead of the curve when it comes to music. The 'new' bands and 'rediscovered' genres played and shown on TV are often bands we've already picked up on.

Have you noticed former HMV customers have now started visiting the store?
Yes, to be honest a lot of HMV customers didn't even know we existed, or else had ideas about what Jumbo was - The amount of times I've heard "oh! I thought you were just a dance/classical/rock etc shop"!. Also people often think indies are going to be expensive but we're often cheaper as we can strike out great deals and campaigns with labels and distros. 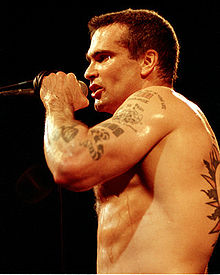 Whilst working in a stationary shop, a friend of mine once sold pencils to David Gilmour of Pink Floyd. What famous musicians have visited the store over the years and can you remember what they bought?
Ha...Over the years we've had everyone from Henry Rollins and Hot Chip to Lily Allen but to be honest, I think a lot of uber famous musicians (who shall remain nameless) love coming in because they're treated like normal human beings and they LOVE chatting about music without feeling people are being star struck

What kind of original ideas does your store come up with to entice folks to buy music?
Ha! We're often running campaigns around labels..So Hawk And A Hacksaw are playing Leeds soon and we decided to get most of their back catalogue in at a bargain price, We did a nice campaign with Soundway Recordings around Latin music and got loads of of our favourite shops and bars in town to play their releases. We often hook up with our fave places like Hyde Park Picture House (cinema) or OK Comics, Revolutions Brewing Company and Laynes Espresso and do things like brew our our beer, make our own coffee with other labels etc.


I love it when the guys from my local record store greet me with "I've got a record I know you are going to love"! In what ways do you try and personalise your service for specific customers?
I guess we treat our regulars in just the way you mentioned, like I said earlier, they're music fans just like us. As for new people we just offer a great service, if we don't have it in then we can always order it. Oh and we're polite too and never condescending.!

When on holiday do you like to go snooping around other stores? Excluding your own, what is your favourite record store?
When on my day off you mean....Haha! Any wedding, any holiday is an excuse to do some scouting around but my fave shop has got to be VINYL TAP in Huddersfield, great knowledgeable staff, uber friendly service and a hell of a lot of records!

Reveal one fact that not many people know about your store.
We've been around for the last 42 years...through all those wonderful genres!

In the 90s, record store staff gained (be it rightly or wrongly) a reputation for being moody, elitist and unapproachable. In what ways has this attitude changed? If any!
Ha! I'll admit that a few shops I frequent can be a bit 'snobbish' , especially second hand ones but on a whole I think most of the myth was brought on with High Fidelity (book and film) and some of the 'dance' shops that existed around that time..

Many of the next generation (and probably the current one) do not buy physical records as they simply have known no other way. What do you feel these kids are missing out on?
I suppose sound quality for a start, and having something tangible. But most of all the buzz of getting music that isn't hyped beyond all value, picking up things that are not secretly fauned about because the label put a full page add in a mag or blog hahaha.

What does Record Store Day mean for your store?
A chance to get over what a great shop can be. And a chance to reach out to even more people. Oh and an excuse to throw a party! 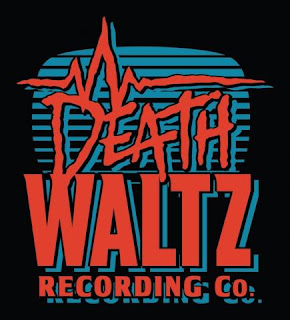 What RSD releases will you be trying to slip into the bag before the store opens on April 20th?
Ha, I have my eye on the Death Waltz but to be honest, fairs fair...it's a day for customers so we make sure they get what they want....

What kind of treats have you got lined up for Record Store Day 2013?
The bands as mentioned earlier and one or two surprises which you'll have to come on the day to find out about...